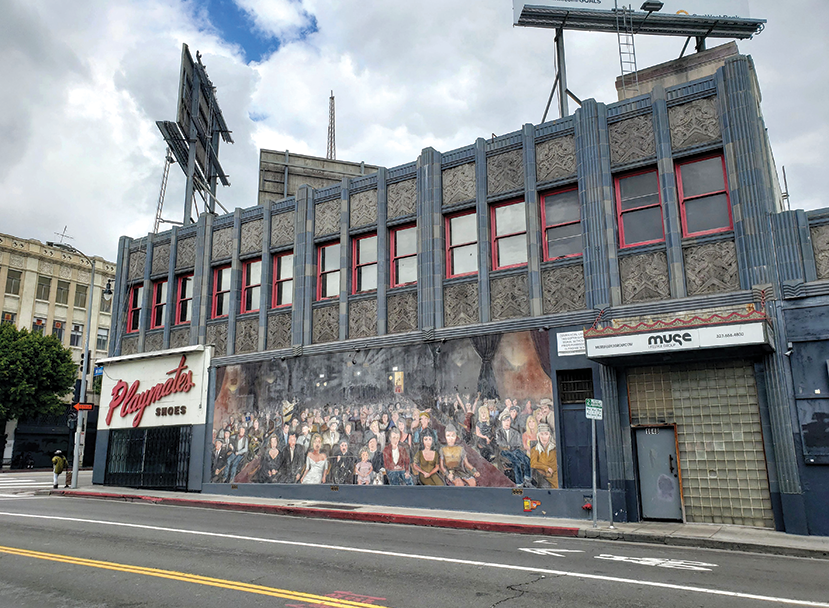 The Attie Building is home to the famous “You Are the Star” mural. (photo by Cameron Kiszla)

A proposed project could drastically change the corner of Hollywood Boulevard and Wilcox Avenue, helping revitalize the portion of the Hollywood Walk of Fame between Highland Avenue and Vine Street.

The Hollywood and Wilcox project plans to restore the nearly 90-year-old Attie Building, which is located at 6436 Hollywood Blvd. and is home to the famous mural “You Are the Star” on its west side. The mural, which was featured in the movie “La La Land,” depicts many famous actors, such as James Dean, Marilyn Monroe and Charlie Chaplin, as being the audience in a theater, watching the viewer on screen. 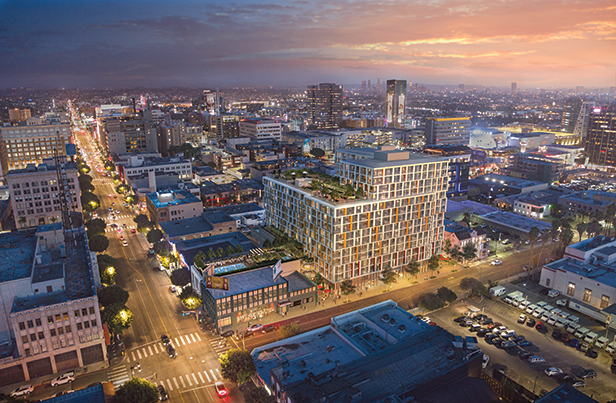 The Hollywood and Wilcox project plans to build a 15-story building adjacent to the historic Attie Building. (rendering courtesy of LeFrak)

LeFrak also plans to build a mixed-use structure just south of the Attie Building. The 15-story building, which will face Wilcox Avenue, will total nearly 280,000 square feet, including 260 residential units, up to 10% of which will be set aside for affordable workforce housing.

Twerdun said this mixed-use project is different from many others currently in the development pipeline in the market it seeks to attract.

“In this specific location, it’s one of the few places where people will actually be able to live, rather than tourists coming in to visit Hollywood and stay in hotels,” he said.

It will also be certified LEED gold and be greenhouse gas-neutral, Twerdun added.

Though residents will be able to use public transit – the Attie building is a short walk from the Hollywood/Vine station for Metro’s Red Line subway – it will include 420 parking spaces. The complex will also feature nearly 34,000 square feet of open space, such as courtyards for the public and for residents, rooftop terraces and a pool deck.

“There’s many different uses right there in that corner,” Twerdun added.

“Even as expensive as Hollywood is to develop within, they’re developing that building at only two stories to match the height of the adjacent building to really ensure that it fits in within the context and scale of Hollywood Boulevard on that block,” he said.

The project is currently in the draft environmental impact report phase of development, and the public can weigh in on the project until April 13, when the 45-day comment period ends. After that, the final environmental impact report will be prepared, and the project will go through the city’s approval process, which will include the Los Angeles City Planning Commission and the City Council’s Planning and Land Use Management Committee before the full City Council makes the final decision.

Twerdun said if there are no major delays, the developers are hoping for City Council approval by the end of the year, and construction could start soon thereafter. However, with the ongoing coronavirus pandemic, that timeline may be subject to change.

“We’re hopeful that the world will start to become normalized in a few weeks to several weeks, but that won’t stop us from receiving comments that the city provided from the community,” he said.

The developers are working from home and remotely to make any necessary changes and respond to the comments from the community for the final EIR, Twerdun added.

Larson said the HPOA is supportive of what the project aims to do, as is the community at large, to the best of his knowledge.

“This is a project that really checks all the boxes. It respects the historic density of Hollywood, it creates affordable housing, it helps to clean up some vacant and blighted storefronts. In our book, this is what a great infill development project looks like,” Larson said.

Twerdun was similarly effusive in his praise for the project site and its new neighbors.

“We think this is a great location,” Twerdun said. “We’re big believers in Hollywood. … It’s an exciting place to be. A lot of people want to be in Hollywood with office development from Netflix and some of the other studios. There’s a lot of good activity in Hollywood.”

WeHo resident does good during pandemic