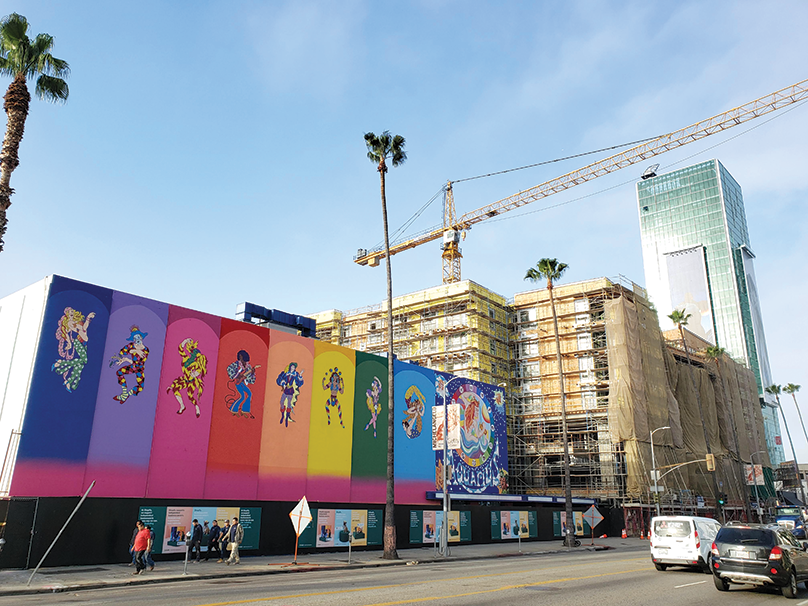 In many parts of Los Angeles, development seems to be moving at a breakneck pace, and Hollywood is no exception.

From hotels and housing units to commercial space for office and retail, the neighborhood has seen significant growth in the past few years, and that trend will continue as projects currently under construction are completed.

Kristopher Larson, president and CEO of the Hollywood Property Owners Alliance, which oversees the Hollywood Business Improvement District, said nearly 1,000 housing units and 934 hotel rooms are currently under construction. In 2019 alone, nearly 400,000 square feet of office space entered the market and now makes up approximately 10% of all office space in Hollywood, he said.

A great deal more office space, as well as residential units, will be included as part of the Netflix on Vine project, which will cover an entire city block south of De Longpre Avenue and west of Vine Street.

When it opens later this year, the project will include five buildings containing 355,000 square feet of office space – the vast majority is for Netflix’s use – 196 residential units and 29,500 square feet of retail, studio and production, and bar and restaurant space.

Jessica Fine, leasing and marketing manager for the developer, Kilroy Realty, said there will be an eatery to be on the first floor of the residential building, and the plan is for it to be a “chef-driven concept.”

“We feel that Hollywood is in need of some great restaurants to go to before you go to a show, or after a long day of work, to get a great drink,” she said.

The tenants of the residences will be treated to sweeping views of Los Angeles from the 20-story tower, which is topped by a shared amenity space that looks over Hollywood. 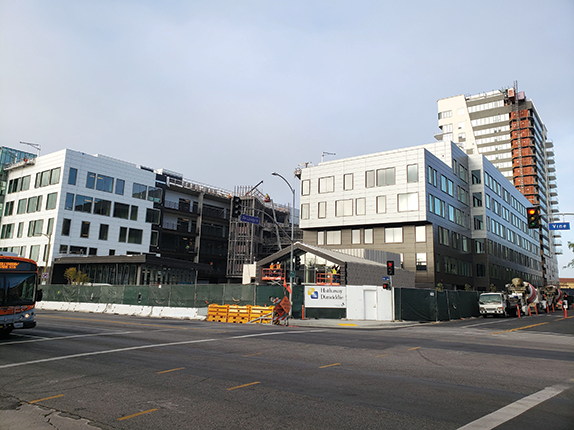 Diagonally from Netflix on Vine, across De Longpre and Ivar avenues, is a hotel project, Godfrey Hotel Hollywood, that plans to open 220 rooms this summer.

Nathalie Fintzi, director of sales and marketing for the Godfrey, said this branch of the Chicago-based hotel chain will feature curated art, a steakhouse named About Last Knife, four bars, a courtyard atrium and a large rooftop that can be divided into four venues for events.

The hotel will be well-suited for press junkets, Fintzi added, which is convenient given that Netflix’s offices will be so close.

“We’re hoping that we will be kind of their home away from home,” she said.

Some of the new projects in Hollywood are also working to rehabilitate historic properties.

The Wallace on Sunset project, expected to be completed in June, will have almost 200 housing units and nearly 4,700 square feet of retail space. Along with offering multiple fitness centers, a community room, pool and seventh-floor skydeck with views of the Hollywood Sign, the project is also helping restore the adjacent Earl Carroll Theatre, which was built in 1938.

The interior renovation of the theater is being conducted by Thaddeus Smith and Brian Levian, who are working to bring the historic property, which was declared a historic-cultural monument in 2016, back to its former glory.

The exterior renovation is the responsibility of Essex, which is restoring the marquee, façade – including the neon – and porte cochere.

“Everything we do is with consideration for the Earl Carroll next door,” Stoddard said.

More commercial activity will be coming soon to Cahuenga Boulevard, where six storefronts have been recently renovated to create more than 8,600 square feet of retail, office and restaurant space.

Lorena Tomb, CEO and founder of Urbanlime Real Estate, said the properties at 1641-1651 Cahuenga Blvd. will allow a variety of uses, and they’re hoping to bring in a sit-down restaurant, a quick-dining eatery and possibly some service-related retail businesses like salons and beauty parlors.

A few blocks east of Cahuenga Boulevard, more retail space is being filled at the El Centro and Eastown mixed-use complexes.

Funko, the pop culture figurine brand, recently opened in the Eastown complex, and later this year, Amoeba Records will relocate from its current location at Cahuenga and Sunset boulevards and move into the El Centro complex.

“Our strategy has really been to create something really placemaking and different, especially for the residents, but then also extended out towards [the rest of Hollywood],” Blakeslee said.

Larson said the retail side will be important for Hollywood in the coming years, as 4,000 additional housing units are “in the pipeline” for development, which will nearly double Hollywood’s residential base in the next five or 10 years.

With those new residents and the increase in commercial space, which will bring new jobs to the neighborhood, Larson said Hollywood is well-positioned for the future.

“It’s really sort of a counter-L.A. lifestyle to be able to live and work in the same place, and we’re seeing that continue to be a competitive advantage for our community,” Larson said.

Robot may be your next deliveryman