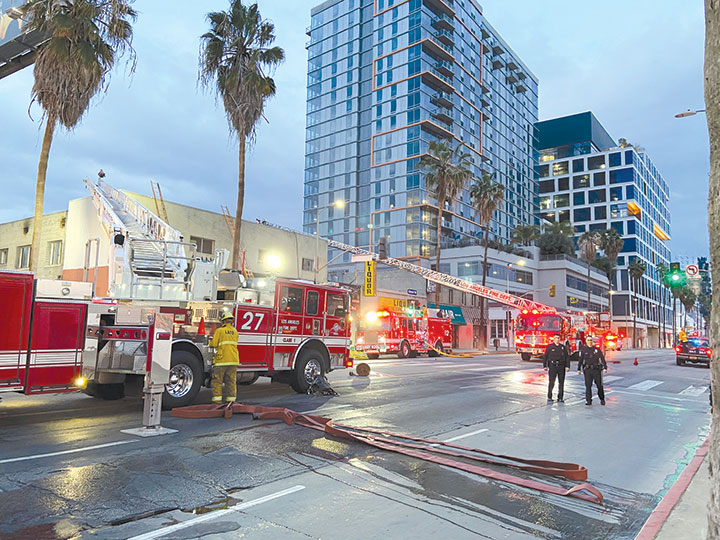 Firefighters staged their equipment on Sunset Boulevard while they extinguished a blaze on March 1. (photo by Edwin Folven)

Firefighters battled a greater alarm structure fire on March 1 in a vacant building at 6015 W. Sunset Blvd. that was the site of a previous fire. No injuries were reported, and the Los Angeles Fire Department officials are investigating the cause of blaze, which has not been determined, LAFD spokesman Brian Humphrey said.

The fire department responded at approximately 4:40 p.m. Flames and smoke were visible from the rear of the building when first responders arrived, Humphrey said.

“The fire was well entrenched in the building and they couldn’t go inside,” he said. “They conducted an exterior attack in the public domain to prevent it from spreading.”

After approximately 20 minutes, firefighters reduced the flames enough that they could enter the building. The fire was completely extinguished at 5:24 p.m., but personnel remained at the scene into the evening to ensure there were no flare-ups.

The structure had previously been deemed uninhabitable by the Los Angeles Department of Building and Safety. A fire occurred at the site on Aug. 31 and the building had since been vacant, Humphrey said. The cause of the earlier fire also remains undetermined.