Updated at 8:45 a.m. on March 13: The filming on Wilshire Boulevard has been postponed indefinitely due to concerns about novel coronavirus. 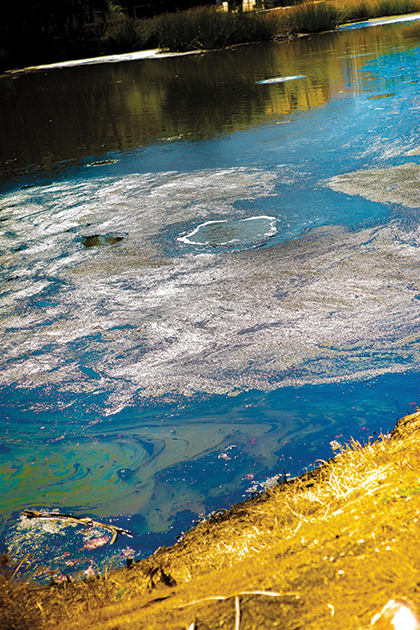 Upon closer inspection, the Lake Pit at the La Brea Tar Pits appears it could be the gateway to another world. (photo by Andy Kitchen)

The stretch of the Miracle Mile near the La Brea Tar Pits and Museum is no stranger to movie and television audiences. It was featured in the 2009 comedy adventure “Land of the Lost,” the 1997 disaster epic “Volcano” and the 1988 apocalyptic thriller “Miracle Mile,” among others.

Now, NBC/Universal Tele­vision is planning to feature the site in a new television series titled “La Brea,” in which a massive sinkhole mysteriously opens near the tar pits and traps people in a primeval world. Filming for the pilot is planned for Saturday, March 14 and Sunday, March 15, and a full closure of Wilshire Boulevard will occur between Fairfax Avenue and Hauser Boulevard.

Although permits for the closure were still in the approval process at press time, the project’s production company Universal Television is spreading the word that motorists may be impacted during the upcoming weekend of filming.

NBC/Universal confirmed a closure of Wilshire Boulevard is planned for the upcoming filming. Danielle Walker, communications coordinator for FilmLA, which coordinates permitting for filming in Los Angeles, said an application for a film permit for the project has been filed by Universal Television, but said she could not comment because it is pending.

Mark Pampanin, spokesperson for Los Angeles City Councilman David Ryu, 4th District, said the production initially requested a full closure of Wilshire Boulevard between Fairfax and La Brea avenues, but the councilman thought that would create too much of an impact. Ryu brokered an arrangement for Wilshire Boulevard to only be closed between Fairfax Avenue and Hauser Boulevard.

The closure, which is anticipated to run from midnight on March 14 to 3 a.m. on March 16, will only affect vehicle traffic and parking along Wilshire Boulevard, and sidewalks will remain open for access to local businesses and museums. Pampanin described it as a hard closure from Fairfax Avenue to Hauser Boulevard, in which no cars will be allowed, and a soft closure between Hauser Boulevard and La Brea Avenue, where motorists approaching from the east will be notified by signs about the road being closed ahead. The soft closure will allow vehicle access to and from businesses along a large portion of the Miracle Mile and will hopefully prevent issues with drivers suddenly coming upon a blocked street. Some side streets may also have parking and other restrictions, including Curson Avenue, which will be closed on March 15 only between Wilshire Boulevard and Sixth Street.

Location managers from the production company have posted flyers with notification about the filming at buildings along the Miracle Mile. Representatives from the La Brea Tar Pits and Museum, which is operated by the Natural History Museums of Los Angeles County, have also been working with Universal Television to coordinate the project.

“During a location walkthrough last month, we were told they will be filming along Wilshire Boulevard, with a portion around the Lake Pit and using part of our parking lot for staging on March 14 and 15,” said Sally Marquez, spokeswoman for the Natural History Museums of Los Angeles County. “We were not involved in any permitting whatsoever. We are sensitive to the inconveniences of any closures and the impact on our museums, local businesses and residents. It is always disruptive, even though we have all grown accustomed to intermittent construction and closures in this vicinity over the years, and we will advise our guests of the closures and to suggest arrival from Sixth Street on those days.”

Motorists traveling through the area and those who are planning to visit local museums and businesses are encouraged to use Sixth or Eighth Streets, which run parallel to Wilshire Boulevard a block north and south, respectively. Some people in the area anticipate disruptions but don’t believe they will be significant.

“The film industry is the economic backbone of our community,” said Stephen Kramer, president of the Greater Miracle Mile Chamber of Commerce. “We haven’t taken a formal position on [the closure], but I think the chamber is generally supportive of the film business. People can still get through, Eighth Street will be open and Sixth Street will be open. It won’t be your average Saturday, but I don’t see it being anything chaotic at all.”

Jim O’Sullivan, president of the Miracle Mile Residential Association, had a different opinion.

“The MMRA does not support this closure,” O’Sullivan said. “We are doing everything we can to notify the public and are distributing the flyer to let people understand what’s happening. To me, it’s another case of the city not following its rules. They could have found other ways to do this so it would accommodate the community. It’s the city not looking out for the community.”

O’Sullivan suggested the production company use computer graphics to create the scenes or employ other techniques that could preclude a major thoroughfare from being closed. He added that there should have been more notification.

“It’s a lack of transparency and a lack of working with people in the community who could have come up with solutions,” O’Sullivan added.

People with concerns or who are seeking information are encouraged to call the production company and FilmLA. The flyer about the filming lists contact information for Universal Television, (818)733-1924, and FilmLA, (213)977-8600 and info@filmla.com.