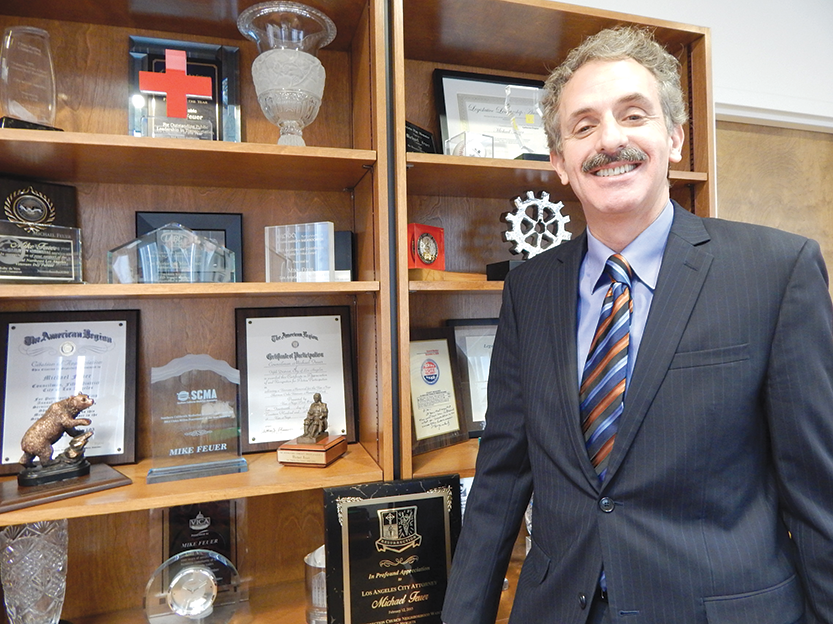 Los Angeles City Attorney Mike Feuer has announced his candidacy for mayor and wants to hear from residents about their concerns. (photo by Edwin Folven)

Los Angeles City Attorney Mike Feuer on Monday became the first candidate to announce a bid to become the city’s next mayor during the 2022 election.

Feuer, a longtime Fairfax District resident who formerly represented the Los Angeles City Council’s 5th District from 1995-2001, and served in the state Assembly from 2006-12, has been city attorney since 2013. He vowed to address homelessness and affordable housing, two of the key issues currently affecting the city, Feuer said. He also plans to keep residents’ concerns at the center of his priorities and is embarking on a series of “listening” sessions throughout the city.

Feuer said his bid for mayor is based on a lifelong philosophy of helping others and improving society. Early in his career, he led Bet Tzedek, an organization that provides legal services for seniors, families and people in need.

“I am on a mission to make the biggest impact on people’s lives for the better,” Feuer said. “I want to take on the city’s biggest challenges and I want to do it with accomplished and neighborhood-centered leadership. I want to fight for people who need us to stand up for them.”

Feuer said the importance of public service was instilled by his father at a young age.

“My dad barely survived a Nazi prisoner-of-war camp in World War II. He emerged determined to use his time on Earth to perform the most important work in the world. For him, that was educating kids,” Feuer said. “My dad’s example led me to public service.”

Feuer said he had early experience in governance by helping Mayor Tom Bradley when he ran for governor during the 1980s. During his eight years at Bet Tzedek, Feuer helped people facing eviction and those who couldn’t afford health care.

“Yes, I’m idealistic. I believe we need to be there for each other,” Feuer said. “I believe there can be quality and integrity in government. I believe in acting boldly, in testing our limits, in unlocking potential. I believe, profoundly, in the future of Los Angeles.”

He added that the he will continue to focus on issues “block-by-block,” similar to the approach he has taken with the city attorney’s office’s Neigh­borhood Prosecutor Program. His office has neighborhood prosecutors assigned to all Los Angeles Police Department divisions to address residents’ concerns, and recently added prosecutors to address the homelessness crisis. He said that ending homelessness is a top priority.

“No one should have to live on the streets, and we need even more urgently to create housing and services,” Feuer said. “At the same time, we’ve got to assure our public spaces are safe and accessible for all of us. Striking that balance will require taking our city’s best efforts to a whole new level. I have the experience to do that.”

Feuer is planning to reach out to people throughout the city in the coming months as part of his campaign, and hopes to hear what people want from the city’s mayor. He said he intends to “hit the ground running on day one.”

“In the days ahead, I’ll have much more to say about issues from public schools to public safety,” Feuer added. “Our best days are ahead of us. If you elect me to serve as your mayor, I’ll do all in my power to tackle our toughest problems with focused, determined and, I’ll admit, impatient leadership, and inspire Angelenos to work as one community, to stand together and with our collective strength, lift up each other.”

Changes for cannabis in West Hollywood?