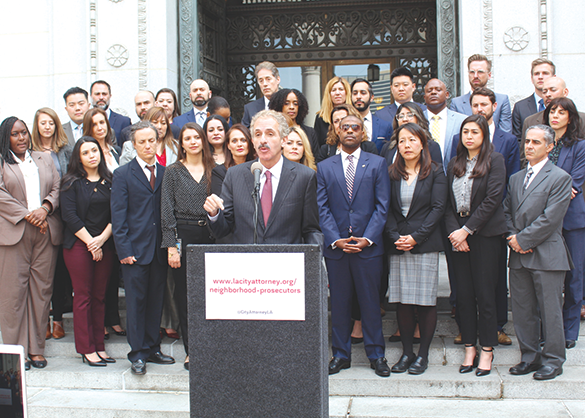 “Since I took office, we’ve taken our Neighborhood Prosecutor Program from eight to 28, more than tripling the number of problem-solving lawyers from my office working in L.A.’s neighborhoods,” Feuer said. “They’re embedded in our communities, listening and responding to residents, schools and business leaders, and making a real difference in neighborhood safety and quality of life. Our new neighborhood prosecutors will help even more as they focus on complex regional challenges our communities face.”

The new neighborhood prosecutors will focus on key issues in different regions of the city. Each will be charged with implementing strategies, coordinating with different agencies and working with communities to solve chronic problems.

Feuer announced that Neighborhood Prosecutor Andrew Said will focus on homelessness at Union Station. Union Station is located at one end of the Red Line subway system, and when trains stop running and Union Station closes from 2 to 4 a.m., there is an opportunity to interact and assist homeless people leaving Union Station, he added. Said will partner with Metro, the Los Angeles Police Department, members of the city attorney’s LA DOOR program and social service providers to establish outreach with the goal of connecting people with services and housing, while also decreasing crime.

Neighborhood Prosecutor Claudia Martin will focus on homelessness at LAX. Similar to Union Station, a significant number of people experiencing homelessness use terminals and other areas at LAX for shelter. This project will increase outreach and services at the airport.

Neighborhood Prosecutor Khalil Rasheed will be assigned to address illegal dumping in South Los Angeles, where violations have occurred for decades. Khalil will first focus on the most notorious sites and work with other agencies and partners to reduce waste, prosecute criminal cases and improve the quality of life in neighborhoods.

Neighborhood Prosecutor Todd Gilman will focus on library issues in the San Fernando Valley. This project aims to significantly improve library safety and plans call for it to eventually be replicated in all libraries.

Neighborhood Prosecutor Raffy Astvasadoorian will focus on package theft in the San Fernando Valley, where he will target areas known to have the largest numbers of people stealing packages from the front porches of homes.

The Los Angeles City Attorney’s Office also has neighborhood prosecutors assigned to each LAPD station, including the Wilshire and Hollywood divisions. For information, visit lacityattorney.org.