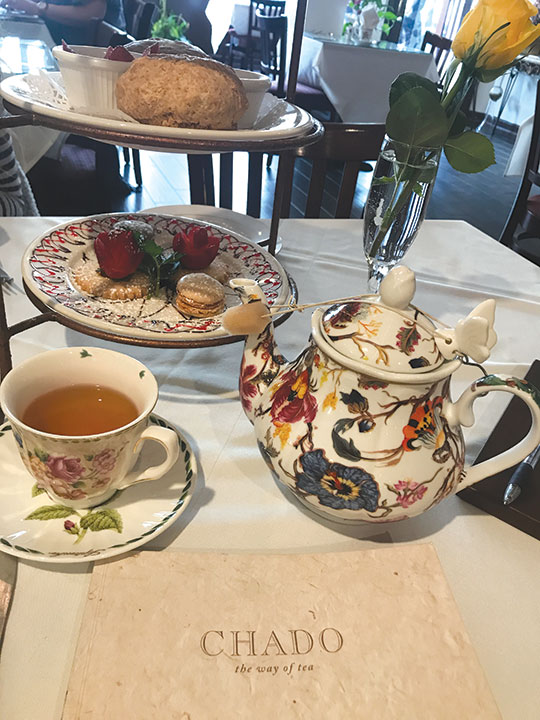 Tea sandwiches include smoked salmon with dill and egg salad made with eggs marinated in smoky black tea. (photo by Jill Weinlein)

Celebrating 30 years in greater Los Angeles, Chado Tea Room has revolutionized how people drink and think about tea. Touted as a “tea lovers paradise” with hundreds of varieties, visitors are presented with a “Bible” filled with pages of caffeinated and decaffeinated teas from around the world.

Recently, my daughter and I had the opportunity to meet Reena Shah, president and a founder of Chado, along with the CEO of Chado, Reena’s daughter, Bianca. They sat down with us during a high tea service at the Pasadena Chado Tea Room.

Reena met her husband, Devan Shah, who grew up in the tea business. They began selling tea in Los Angeles.

In 1990, they opened their first Chado Tea Room on Third Street. The store has since closed, but the legacy lives on at four other locations providing a high tea service and full selection of premium teas.

Chado gets its name from the word “cha” – meaning “tea” in Chinese – and the word “do” – which means “way” in Japanese. Each tea room has knowledgeable servers educating guests about the varieties of tea.

Bianca recommended we started with a pot of strawberry-, chocolate- and Champagne-flavored hot tea.

We ordered the celebration afternoon tea service, which begins with a choice of a salad or a light orange and creamy heirloom tomato soup enhanced with basil and cilantro. We selected the soup, which was pure comfort, especially when dipping one of the toasted bread slices into the soup.

The tea service continues with a three-tiered stand filled with a variety of sandwiches on the top plate: smoked salmon with dill and lemon, egg salad made from hard boiled eggs marinated in smoky black tea, chicken salad with cranberry, and cucumber.

Light jazz played in the background as we sat among walls lined with a beautiful tea pots and large glass jars displaying blended tea from around the world.

On the middle tier were two warm scones served with Chado’s homemade cream, fresh sliced strawberries and berry jam. Our server recommended that we eat these first, while they were still warm.

Desserts on the bottom include fresh strawberries, shortbread cookies and flavored macarons.

Tek Mehreteab, now a partner in the Chado Tea group, came to our table and offered a tea tasting of six different types, starting from light to dark, with yellow tea from China as the first one to taste.

“It’s rarer than white tea, and Reena’s husband imported yellow tea back in 2009,” Tek said. Once the tea leaves are picked, they turn yellow, are sun-dried and pan fried to achieve a clean flavor. “Everything is from one single plant, just a different process is used to create white, oolong, black and green tea.”

Most green tea is grown in Japan.

“The leaves are picked in spring and covered in bamboo to promote more chlorophyll, giving the flavor a grassy essence,” Tek said.

Matcha is finely ground green tea that is turned into a powder, mixed with hot water and whisked.

“This tea is served in most Japanese tea ceremonies,” Tek said.

He said Darjeeling tea is the Champagne of teas.

“You can’t replicate Darjeeling tea grown in the Darjeeling district in India,” Tek said. “When properly brewed, it offers a musky spiciness with a floral aroma.”

He also informed us that “chai” means tea in India, yet in America it is known as a “spicy tea.” At Chado, the Bianca chai with shredded coconut is delicious.

The L.A. Tea Festival in August is an annual two-day event that Devan Shah started in 2011.

“What started with 12 tea companies and 900 people, now has 44 tea companies with 2,400 people sampling over 400 different teas,” said Bianca, who now runs the festival since her father passed away four years ago.

Visit one of the Chado Tea Rooms to enjoy afternoon high tea. $$

‘Onward’ is fun but bypasses memorable