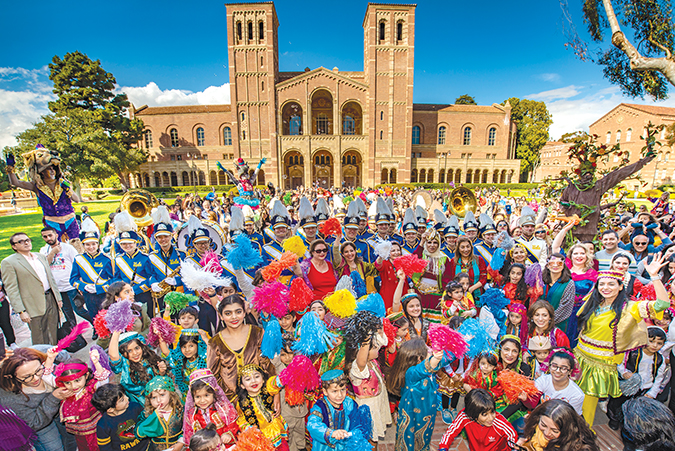 A crowd stands in front of Royce Hall during the Nowruz festival. (photo courtesy of Farhang Foundation)

Farhang Foundation is celebrating its 12th annual Nowruz festival at UCLA on Sunday, March 8, from noon to 5 p.m. with music, dance, food and children’s activities.

Nowruz, which translates to new day, celebrates the Iranian New Year on the vernal equinox in several countries including Iran, Afghanistan, China and the U.S. The Farhang Foundation’s festival kicks off with the organization’s annual Street Nowruz Banner Design Competition.

Every fall Since 2011, the foundation encourages designers to submit original designs that capture Nowruz. Setareh Feylizadeh, a Paris-based graphic designer, won the competition this year with a design inspired by Iran’s 19th-century Qajar portraiture.

“For me, Qajar imagery always sparks the notion of old and new, past and present,” Feylizadeh said. “The new year reflects these qualities as it is a time to reflect on tradition, but also instills the hope of transformation and renewal.”

Festival goers will have the opportunity to join the UCLA Bruin Marching Band in the sixth annual Spring Walk through Dickson Court and adjacent areas. Participants are encouraged to wear traditional or colorful costumes.

The Djanbazian Dance company will perform with a series of Iranian dances incorporating traditional and modern themes. A variety of entertainment is programed for the event such as Arezoo Kouchekan’s L.A. Daf Ensemble, storytelling by Boshra Dastournezhad, a children’s puppet show, Grand Haft Sin Display and an Iranian tea house.

The main event will be a centerpiece musical program by soprano Darya Dadvar at Royce Hall. She is a Paris-based opera star who will be performing a Nowruz program with classical Iranian songs interpreted in an operatic style.