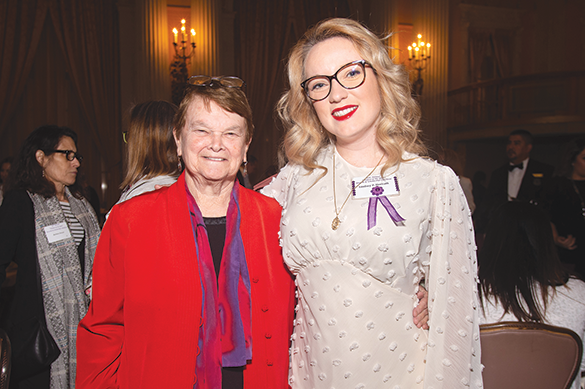 Los Angeles County Supervisor Sheila Kuehl presented an award to West Hollywood Mayor Pro Tempore Lindsey P. Horvath (right) on March 9 recognizing her as the 3rd District Woman of the Year. The award was presented at a luncheon at the Millennium Biltmore Hotel. Horvath was honored during the Los Angeles County Commission for Women and the Board of Supervisors’ Women’s History Month celebration.

“Lindsey is one of the bright lights and brilliant connectors in the progressive community in Los Angeles,” Kuehl said. “She is a longtime leader on women’s, LGBTQ+ and transportation issues.”

Kuehl credited Horvath for her leadership in serving as a global coordinator for One Billion Rising; creating the first West Hollywood Community Response Team on domestic violence; initiating policies to support workers, families, students and transgender individuals; advocating for projects that have and will make West Hollywood more pedestrian- and bicycle friendly; and pushing for expanding Metro’s light rail network through the city.