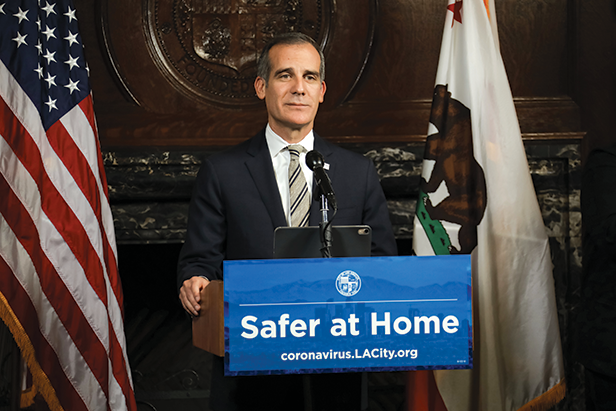 Los Angeles Mayor Eric Garcetti and Los Angeles City Attorney Mike Feuer announced that the city will take “strong” measures to enforce the “Safer at Home” emergency order, which requires people to stay in their residences unless performing essential tasks.

“We’re all safer at home and that’s not a suggestion, it is the law,” Garcetti said. “Refusing to follow it isn’t brave or funny, it’s stupid and could wind up killing you or someone else. Angelenos are doing an extraordinary job of staying in their homes, and we won’t tolerate the selfish behavior of a few who unnecessarily put our community at risk.”

The “Safer at Home” order requires residents to remain in their homes except for performing the most essential activities, including critical tasks such as securing food, health care, safety and medical necessities, as well as caring for children, elder adults, family, friends and people with disabilities. Failure to follow the order is a misdemeanor that can result in fines or jail time.

Feuer has assigned his neighborhood prosecutor team to work with the Los Angeles Police Department to seek compliance and enforce the city’s order when necessary. In addition to individuals, authorities will be in the field looking for businesses that are not complying with the order.

“In the strongest possible terms, I urge that Angelenos adhere to the ‘Safer at Home’ order, and non-essential businesses shut their doors,” Feuer said. “Those crucial steps protect all of us. As part of the city team, my office’s neighborhood prosecutors will work toward gaining compliance with the order, helping ensure that our families are safe.”

In addition to the city attorney’s neighborhood prosecutors, the mayor announced the formation of the “Safer at Home” Business Ambassadors program, which will deploy city workers and volunteers with the mayor’s Crisis Response Team to businesses that appear to be out of compliance with the emergency order. The goal is to secure voluntary compliance, and if that is not achieved, the ambassadors will provide the information to the City Attorney’s Office and LAPD, which will investigate the reports. Members of the public can report businesses believed to be out of compliance by visiting coronavirus.lacity.org/reportbusinessviolation.

Los Angeles County Sheriff Alex Villanueva said on March 24 that deputies would also be looking for businesses in violation of the county’s “Safer at Home” order and would take similar steps to prompt voluntary compliance.

Villanueva said that gun stores would be required to close, but reversed that decision on March 25 after consulting with county legal experts and determining that an order to close gun stores must come from the state. On March 26, Gov. Gavin Newsom gave local sheriffs authority to decide whether gun stores should close in individual counties, and Villanueva ordered them to close to the public while the Los Angeles County “Safer at Home” order is in effect. Villanueva allowed gun stores to continue to sell ammunition to private security companies and anyone who has already purchased a firearm may take possession once background checks are completed.