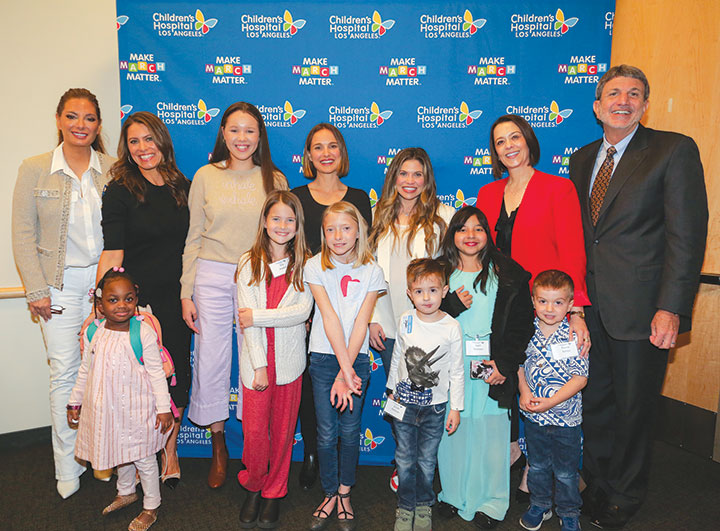 Natalie Portman, actress and CHLA supporter, and Danielle Fishel Karp, director and CHLA patient parent, joined the hospital to kick off the campaign.

“Five years ago, this fundraising campaign took its first steps and our community and local businesses enthusiastically joined us in our commitment to improve children’s health,” said Paul Viviano, CHLA president and CEO. “As we embark upon our fifth Make March Matter campaign today, I am thrilled to be here with seven former patients, all of whom have benefited from the world class care our hospital provides.”

Since the campaign’s launch in 2016, Southern California business and corporate partners have helped raise a total of $7 million to aid in funding life-saving care for children in L.A. and surrounding communities. Individuals can participate in this year’s campaign in a variety of ways such as buying coffee at a local coffee shop, dining with family and friends at a local restaurant and shopping at a favorite store.

Each year, CHLA treats children who face a broad range of health issues from common illnesses to traumas and chronic diseases. The hospital is also dedicated to innovation, supporting advances in research designed to improve pediatric health outcomes and partnering with physicians across the nation to bring care here to children in L.A.

Corporations across the Southland have agreed to support community members in giving back. Businesses have selected a unique way to contribute to the campaign such as selling specific items with proceeds supporting CHLA patients, others devote a portion of overall sales for the entire month and others create their own fundraising campaigns.

Panda Restaurant Group, parent company of Panda Express, is one partner of CHLA Make March Matter campaign and has been a top fundraiser for the fifth consecutive year.

“March has become a special time of year for our Panda Team, working harder than ever to raise funds through out in-store donation boxes and associate giving initiatives,” said Peggy Cherng, co-founder and co-ceo of Panda Restaurant Group. “The donations will go towards CHLA’s Panda Cares Center of Hope and programming, designed to better children’s physical, emotional and mental well-being.”