Changes for cannabis in West Hollywood? 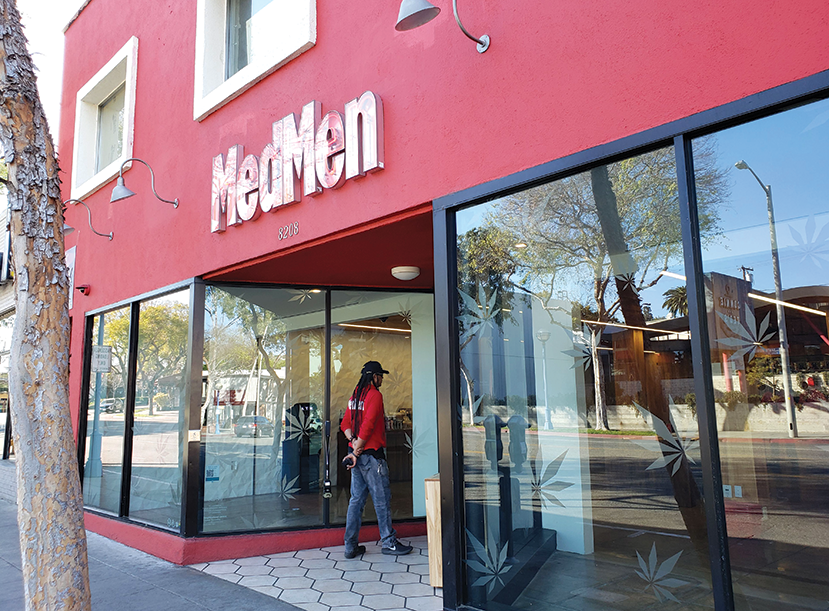 MedMen West Hollywood is one of the “WeHo Originals” who are seeking changes to the city’s cannabis rules. (photo by Cameron Kiszla)

A pair of proposed ballot initiatives aim to amend the city of West Hollywood’s rules regarding cannabis businesses.

The West Hollywood Close the Loopholes Initiative, the first initiative to be announced, would have West Hollywood combine its medical and recreational sales permits into one type of retail permit and would combine smoking-allowed and edible-only consumption lounge permits into one consumption lounge permit, among other changes.

Supporters of the Close the Loopholes initiative believe the city’s process is overly complex – more so than state regulations, which don’t differentiate between medical and recreational sales – and the city ordinance was put in place before the state finalized its rules that do not allow consumption lounges to sell anything other than cannabis products, which consumption lounge permit winners allege makes it very difficult for them to successfully operate their businesses, many of which planned to use the sale of food and drinks to keep customers in their stores. So far, only one consumption lounge – the Original Cannabis Café – has been able to begin operations, and it relies on an adjacent restaurant to “deliver” food to the lounge.

“Currently, medical marijuana sales make up less than 3% of overall retail sales in the state of California. To continue to provide access to safe, state compliant product to patients, all retailers should be able to sell both adult use and medical marijuana,” said Morgan Sokol, executive vice president of regulatory affairs for MedMen, in an email. MedMen West Hollywood is one of the “West Hollywood Originals,” four dispensaries that were given temporary recreational cannabis licenses when the state began allowing the sale of recreational cannabis but did not earn permanent adult-use retail licenses in the city’s selection process, which was performed by a committee of five people selected by City Manager Paul Arevalo.

“The city of West Hollywood’s process for licensing cannabis retailers and consumption lounges has led to delays and confusion for medical marijuana patients, cannabis consumers and local residents,” added Jason Beck, founder, owner and president of “WeHo Original” Alternative Herbal Health Services and a supporter of the Close the Loopholes ballot initiative, in an email.

The Close the Loophole initiative also would allow cannabis licenses to be transferred with approval from the city manager.

“Business licenses are frequently transferred or sold in other sectors of business. Cannabis is no different. We should not proactively limit business growth,” Beck said.

Additionally, the initiative would allow more time for permit winners to earn their business license, allow cannabis odor to be detected in “negligible” amounts outside of cannabis businesses – no odor is allowed to be detected now – and make it easier for cannabis workers to unionize.

According to the Close the Loopholes initiative website, its funding comes from West Hollywood Residents and Businesses for Fairness, which is a coalition of cannabis businesses, United Food and Commercial Workers International Union Local 770 and concerned residents. The website lists major funders as MedMen West Hollywood, Alex Kardos and UFCW Local 770. Kardos is founder and partner of Where Eagles Fly, which was awarded a permit for an as-yet-unopened edible-only consumption lounge called the Fantom Flower. UFCW Local 770 represents cannabis retail workers.

Beck said so far, the public has been very supportive, with 70% of West Hollywood voters supporting combining the medical and recreational permits into one category.

And while the campaign is largely funded by those who would benefit from its passage, Beck said everyone will be better off if the initiative is put into law.

“Voters vote for initiatives that they feel benefit their community, whether it’s environmental, public safety, planning or fiscal,” Beck said. “Our measure is the same. Consumers, tourists and residents of West Hollywood will all benefit from aligning the cannabis regulations with what the public supports.”

The other initiative, which is supported by the Adult Use Retailers Association of West Hollywood or AURA – a collection of the businesses who were awarded adult-use recreational permits in the city’s ballot process – would make only minimal changes to the city’s cannabis ordinance.

Scott Schmidt, executive director of AURA, said their initiative was put forth in response to the Close the Loopholes initiative and argued that the City Council’s process of deferring to the committee was a fair way of deciding who received permits.

“We believe that the City Council got it right the first time …. When corporate cannabis [companies] like MedMen didn’t like the outcome of the independent, merit-based selection process, they wanted to change the process,” Schmidt said.

Schmidt argued that the transfer of cannabis licenses could result in a situation where a qualified applicant wins a license, then sells it to an unqualified business.

“What’s the point of having a merit-based process if the winners can turn around and sell the license?” Schmidt asked.

Schmidt also alleged that MedMen is trying a new tactic to change the city’s process after they sued the city in September – the case is ongoing – and the “WeHo Originals” unsuccessfully petitioned the City Council for permanent adult-use retail licenses in June.

“I think the people of West Hollywood are smart and will see through what’s happening,” he said.

The competing initiatives will appear on the November ballot if they gather signatures from 10% of registered voters in West Hollywood. City Clerk Yvonne Quarker said that would require approximately 2,800 signatures per initiative, and in her 17 years with the city, only one other initiative – term limits for the City Council – actually made it onto the ballot.

“It’s not an easy feat to get 2,800 ballot signatures in the city of West Hollywood. You have to catch people who are indeed residents and who are registered to vote in the city,” she said.

Quarker said the signatures would likely need to be turned in by May or June for the signatures to be verified in time to make the November ballot. If both make the ballot and both get more than 50% yes votes, whichever measure earns more votes will be enacted.

However, some of the ideas in the initiatives could still be enacted even if they don’t make the ballot. The council could choose to adopt some or all of the provisions themselves, and some concerns, such as the transfer of licenses between business owners, are already being considered.

In November, the City Council directed staff and the city’s Business License Commission to bring the council a recommendation for how to handle ownership changes. City staff expects the commission to consider the item on April 13 and the full council to consider the item on April 20, according to John Leonard, West Hollywood community and legislative affairs manager.