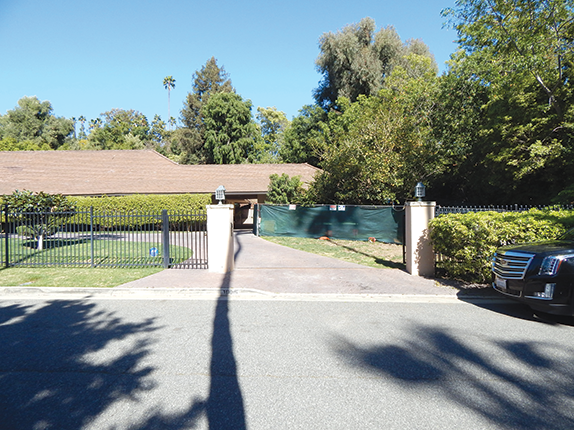 A disagreement over the driveway at 1006 Pamela Drive led the Beverly Hills Planning Commission to discuss the role of city staff on Feb. 27. (photo by Cameron Kiszla)

On Feb. 27, the Beverly Hills Planning Commission considered what could be a major change to how projects are handled after they receive commission approval.

The commissioners debated who decides how the commission’s conditions of approval are interpreted when disagreements arise as projects are designed and constructed. Currently, city staff ensures those conditions are implemented and interprets the intent behind the conditions if someone complains.

No action was taken on the issue because the matter was put on the agenda as a study session, but Vice Chair Peter Ostroff said he believes staff should only implement the conditions, not try to interpret them, as that would be “entirely inappropriate.” Ostroff added that he did not mean to criticize staff, only that he wanted the right people doing the interpreting.

“I feel very strongly that there needs to be a review by someone accountable to the residents of Beverly Hills – to wit, the City Council or Planning Commission, which is appointed by the City Council,” Ostroff said.

At the heart of the debate is an issue with the work being done at 1006 Pamela Drive, where the Planning Commission stipulated that a driveway design include a narrow strip of landscaping for privacy. Neighboring families – Al and Kathy Checchi and Dr. Behrooz and Angel Broukhim – allege that the property owner is using two-foot-by-two-foot caissons, or boxes, instead of planting directly in the ground.

The Checchis said they’ve spoken to a plant expert, who advised them that the caissons will prevent the plants from reaching full capacity and thus providing enough privacy. A city staff report listed Parisa Nejad of Crest Real Estate as the project applicant. Nejad did not return a request for comment.

When the Checchis and Broukhims took their complaints to city staff, they were told the caissons were sufficient to meet the conditions of approval and the matter would not go back before the Planning Commission, Al Checchi said.

“I submit it is wrong to allow staff to interpret city ordinances, and then let these same people block all avenues of appeal,” he added.

Beverly Hills resident and activist Debbie Weiss, who pushed back against the development of a mansion in her neighborhood and now represents others in similar situations – including the Checchis and Broukhims – said staff is “often very dismissive of the concerns that are raised to them.”

“In the event of a dispute over interpretation, whether by a resident or an applicant … I believe that the interpretation should be clarified by those who made the conditions. As such, I do not think staff should have the final say,” Weiss said.

Because the Pamela Drive project was not agendized, Weiss, the Checchis and the Broukhims spoke during general public comment, and the commissioners did not address that dispute specifically. However, they did debate at length how similar situations might be handled in the future.

Commissioner Lori Greene Gordon agreed with Ostroff, saying that while taking interpretation questions to the Planning Commission should not happen with every project, it would be “a safety valve in an extraordinary situation.”

“I think it would not be inappropriate to allow the commission to say, ‘Wait a minute, we said X and they’re doing Y. We did not agree to Y.’ I don’t think that’s out of the realm of an acceptable use of our time,” Gordon said.

The other commissioners, however, were less inclined to consider interpretation questions. In addition to some of the concerns raised by staff, such as the time and expense of noticing another public hearing to reconsider an already approved project, Chair Alan Robert Block and Commissioners Farshid Joe Shooshani and Andy Licht pointed out the potential for opponents of a development to use interpretation questions to delay a project.

“People could come in and go to staff and say, ‘This wasn’t what was approved by the commission,’ … We’re opening up a Pandora’s box because that would continually come back to us,” Block said.

Licht pointed out that there was no clear-cut way to define what would be eligible for commission reconsideration and what would be left for staff to decide.

“I think there is room for abuse. I think we’re usurping the job of the staff. They know a lot more about interpreting plan and engineering documents than I do,” Licht said.

With everyone’s positions made clear, discussion ended, though Ostroff made a final plea to characterize the issue as a matter of right and wrong.

“It seems to me that delegating our responsibility to interpret our own resolutions to staff or to anyone else … I think that would be irresponsible of us, and I don’t want to do anything irresponsible,” he said.

Block said the Pamela Drive issue will be considered by the City Council.