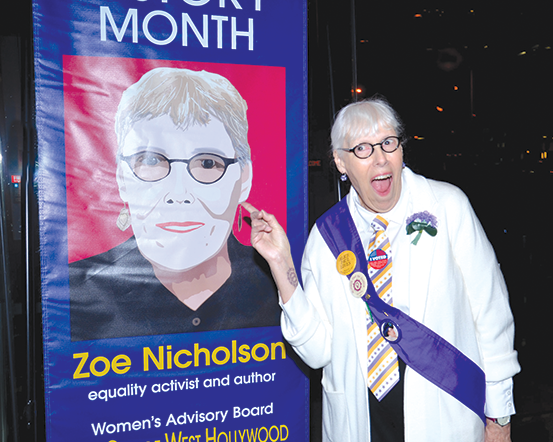 Feminist rights leader Zoe Nicholson has been honored with a banner that will be on display in West Hollywood throughout Women’s History Month in March. (photo by Richard E. Settle)

The city of West Hollywood has unveiled street pole banners that commemorate famous American women, civil rights leaders and women’s rights activists that will be on display along Santa Monica Boulevard in March during National Women’s History Month. At the March 2 West Hollywood City Council meeting, two new street pole banners were celebrated honoring feminist leader Zoe Nicholson and commemorating the 100th anniversary of the 19th Amendment to the U.S. Constitution. The presentation was hosted by the city’s Women’s Advisory Board. For information, visit weho.org.