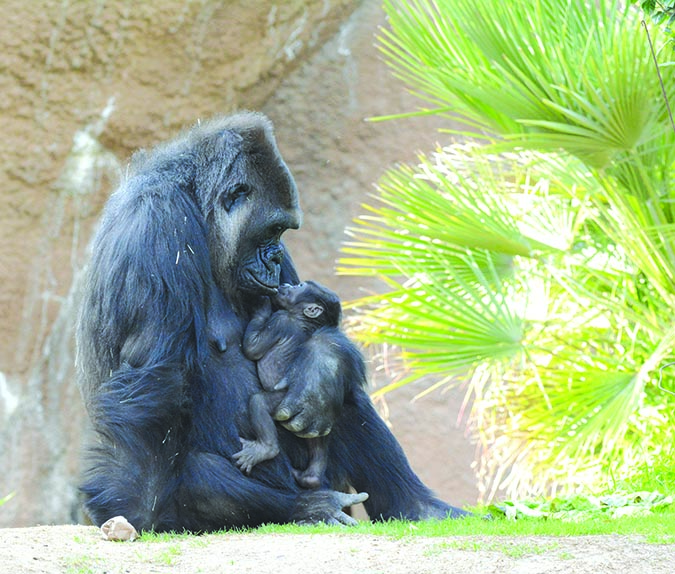 N’dija, a western lowland gorilla, embraced her baby daughter Angela inside her enclosure at the L.A. Zoo. (photo by Tad Motoyam)

The baby was born on Jan. 18 and has not only won over the hearts of fellow members her troop, but has brought members of the Los Angeles community out in droves to see her in the zoo’s Campo Gorilla Reserve bonding with her mother, N’djia (en-JEE-uh).

“The L.A. Zoo is very fortunate to have had a long-time donor name the gorilla baby after his daughter, Angela,” said Beth Schaefer, director of animal programs at the L.A. Zoo. “We think the name is perfect considering this girl was born here in Los Angeles, which naturally makes her a proud Angeleno. We can already see how the community is connecting with this baby, which is shining a light on this critically endangered species and what we can do to save them from extinction.”

The arrival of the baby gorilla inspired Basil Collier, director of the Angela Collier Foundation and a long-time supporter of the zoo, to aid in western lowland gorilla conservation efforts.

“We have long hoped for the birth of a female gorilla so that we could name her in honor of our daughter, Angela Collier, who spent her short life believing that the most important contribution she could make to the world was for the welfare of animals,” Collier said. “Naming the baby after Angela is a confirmation of the fine work of the L.A. Zoo in saving animals from extinction.”

Western lowland gorillas are considered critically endangered in the wild due to illegal hunting, diseases and habitat degradation and destruction. The baby is of a species of gorilla native to the lowlands and swamp forests of Cameroon, Central African Republic, Equatorial Guinea, the Democratic Republic of the Congo, Gabon and Angola. The peaceful animals are social and live in stable, cohesive groups composed of one silverback adult male, several adult females and their offspring.

Guests can visit the Campo Gorilla Reserve exhibit daily to observe Angela, N’djia, her father Kelly and their companions Rapunzel and Evelyn.