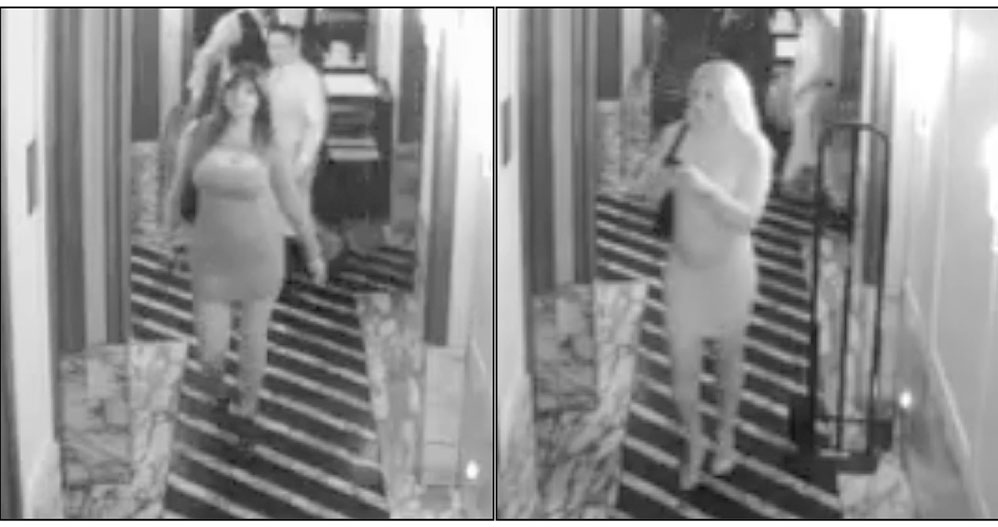 Security camera photographs were released of the two women who allegedly stole watches after meeting two victims at a restaurant. (photo courtesy of the LAPD)

Detectives with the Los Angeles Police Department’s Commercial Crimes Division are searching for two female suspects who allegedly drugged a male victim and stole expensive watches after they accompanied the victim and a friend home after dining at a West Los Angeles restaurant.

The alleged crime occurred on Oct. 28, but authorities only released the information on Feb. 10 after exhausting all leads, said Detective Manny Pedroza, with the Commercial Crimes Division, Burglary Special Section. The women, who were 20 to 30 years old, have not been linked to any other similar crimes, but Pedroza urged any other victims to come forward.

The incident began at approximately 9:35 p.m. on Oct. 28 when two male victims were dining. Pedroza declined to identify the restaurant, citing the ongoing investigation.

The two women approached the victims and engaged the men in a conversation, Pedroza said. After dinner, the women agreed to accompany the men to a residence belonging to one of the victims in the 6500 block of Lindenhurst Avenue.

While at the residence, one of the female suspects mixed drinks, and Pedroza said she placed an unknown substance in the cocktails. A short time later, one of the female suspects went outside with one of the victims, while the other two stayed inside. After the woman who went outside asked to use the bathroom and did not return for several minutes, the man went back inside and found his friend unconscious. Both of the women were gone, Pedroza added.

“I definitely think it was premeditated. I think they went to this restaurant to rob someone,” Pedroza said. “They found these gentlemen who were wearing expensive watches at the restaurant, and I believe they were targeted.”

Pedroza said only one of the them drank the cocktail and was rendered unconscious. The other victim called authorities and the victim was taken to a hospital. He recovered completely in the days following the incident, Pedroza said.

The suspects stole two Patek Philippe watches, which Pedroza said have a combined valued of approximately $200,000. The detective added that investigators have been canvassing websites and locations where people commonly resell jewelry and watches, but have been unsuccessful in generating leads. He added that people often sell similar stolen items in places like New York and Miami as to not raise suspicion in the area where they were stolen.

“There are always people willing to buy these watches on the black market,” Pedroza said.

Authorities have no vehicle description associated with the suspects, as one of the women accompanied the men in their vehicle, and the other used a ride-hailing service. Pedroza added that detectives have been working with ride-hailing companies searching for clues, but have been unsuccessful. He added that one of the primary clues about the women is they were both wearing wigs, which was confirmed by the victims.

The suspects were both white, 5 feet 3 inches to 5 feet 5 inches tall and 140 to 150 pounds. One was wearing a blonde wig, while the other was wearing a red wig. The suspect with the red wig had tattoos of hearts and butterflies on her stomach.

“We are reaching out to the public to see if someone recognizes [them],” added Pedroza, who cautioned people about becoming victims. “I definitely wouldn’t take someone home for a night cap, especially someone you just met at a bar or restaurant that night.”

Wow two Patek Philippes. These two sure knew what they were looking for. Too bad they weren’t fakes.