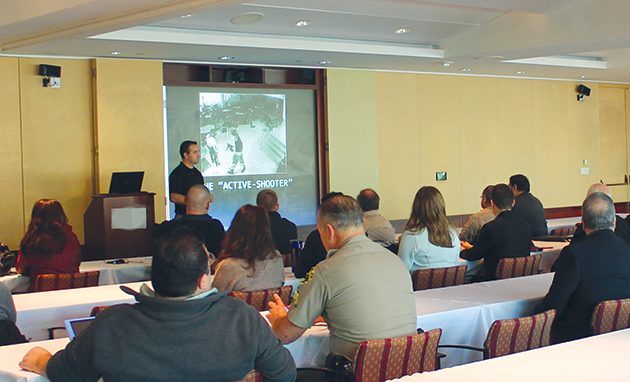 Tonight, Feb. 13, the city of West Hollywood will hold a first-of-its-kind community class to teach members of the public how to respond in active shooter situations.

The course will be led by Erik Franko from High Speed Tac Med, a company that develops emergency response programs, and will cover how to treat injured individuals, increasing situational awareness and what to expect when law enforcement arrives. HSTM has previously trained city staff how to respond to active shooter situations.

“We are painfully aware that gun violence is a threat in every community across the nation. Shootings can happen at any time, in any place,” said Kristin Cook, director of the city’s Public Safety Department. “If the unthinkable were to happen in West Hollywood, our first responders are prepared. With active shooter trainings, we’re working to make sure there are resources for the community to be prepared as well.”

In September, the council unanimously approved a motion introduced by Councilwoman Lauren Meister that directed the Public Safety Department to organize the training and gear it toward nighttime entertainment establishments. The motion also directed the Facilities & Field Services Division to install emergency call boxes in public areas such as city parks, which would provide direct communication with first responders.

Meister said she initiated the motion after members of the public reached out to her about developing training for active shooter situations.

“Obviously, having gone through the Pulse night club shooting, our community was very stunned by that and could relate to that,” Meister said. “In the past, we’ve had active shooter training for the bars and employees of the bars, but there has been an interest from the general public to also go through that training.”

The class marks the first time this type of training has been offered by the city to the community and is part of its handbook curriculum to assist nightlife owners in maintaining safe bars, lounges and clubs.

The active shooter response training will be held from 6 to 7 p.m. in the West Hollywood Library Community Meeting Room, 625 N. San Vicente Blvd. No RSVP is required.