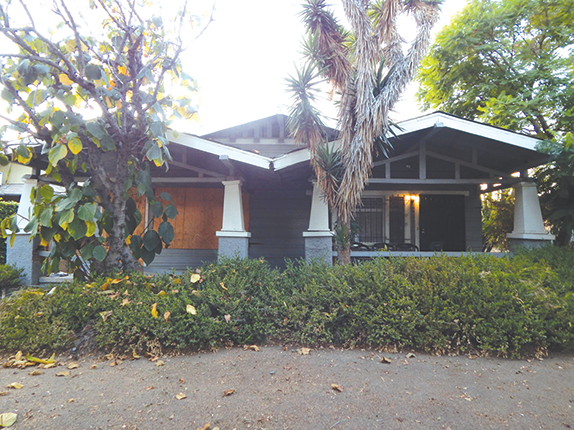 The Craftsman-style duplex on Detroit Street was built in 1914. (photo by Cameron Kiszla)

The 106-year-old, 2,000-square-foot main structure at the front of the property is the focus of the designation, though a newer duplex at the rear of the property will not be included.

In a variation from the norm, the council considered the duplex’s historic value because the property owner, Kathy Younessi, appealed the commission’s October decision to recommend that the property be declared historic. Younessi does not support the local cultural resource designation.

Multiple historic resource assessments have come to differing conclusions on the duplex’s historic value, and the property owner nominated the duplex to receive a final ruling.

The property owner’s representatives, Marc Yeber, a former planning commissioner and historic preservation commissioner for West Hollywood, and Pam O’Connor, an architectural historian with the firm Kaplan Chen Kaplan, argued against the building’s value to the community.

“When we’re looking at this and we’re thinking about, ‘Is this the quality level of an architectural specimen that should be maintained for its architecture?’ … We posit that the building doesn’t represent an early or rare example of the style,” O’Connor said.

Yeber added that there are other Craftsman-style homes in West Hollywood that are more worthy of protection.

“This isn’t a rare occurrence in the city,” he said.

The council, however, sided with the 12 members of the public who spoke and contributed comment cards in favor of protecting the duplex, voting 4-1 to deny the appeal and approve the cultural resource designation.

Councilman John Heilman, who cast the lone no vote, said the council did not have enough “substantial evidence” to affirm that the building has enough historic, architectural or cultural value to receive the local cultural resource designation.

“I’m having difficulty making the findings that we have to make,” Heilman said.

Councilman John Duran pointed out that the council was hearing an appeal, and he did not see any new evidence, errors or anything else that would indicate that the commission made a ruling that was not supported by facts and expert opinions.

“I think it’s best to defer to our commission and our staff on this item, given their expertise,” Duran said.

Other council members noted that while they shared some of the reservations of the property owner – including the number of alterations made to the property – the local cultural resource designation leaves the door open for the property to be redeveloped.

“We’re looking at the building in the front, not the building behind the Craftsman,” Councilwoman Lauren Meister said. “So maybe if they want to redevelop that building, there you go. There’s something they can do.”

The front structure could also be altered if the planned structure retains some of the character-defining features of the Craftsman architecture. Jennifer Alkire, current and historic preservation planning manager for West Hollywood, said the project site would require a certificate of appropriateness from the city and review under the California Environmental Quality Act, but if the project cleared those hurdles, new housing could be built.

Mayor Pro Tempore Lindsey Horvath added that she agreed in part with both sides on the issue, but this vote might clear the way for a project that could benefit everyone.

“We’ve made a path forward for a potential new development that does give us more housing while also protecting what is significant to the community about the cultural aspect of this building,” Horvath said.