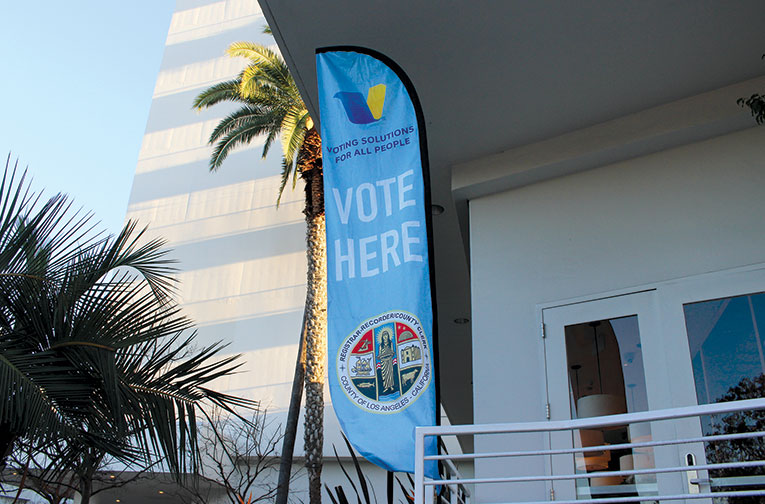 A voting center at the Beverly Hilton, 9876 Wilshire Blvd., one of two voting centers located in Beverly Hills, is now open from 8 a.m. to 5 p.m. (photo by Morgan Keith)

The California primary election will take place on Tuesday, March 3, as one of 14 contests scheduled for Super Tuesday. Voters will select a presidential nominee for both the Republican and Democratic parties as well as officials for state and local offices.

Los Angeles County changed its voting process ahead of the March 3 primary election to provide more time for voters to get to the polls. Voting opened on Feb. 22, giving voters 11 days to make decisions on races and measures.

Lacey was sworn in as DA in 2012 and reelected without opposition four years later. Gascón served as San Francisco DA for eight years, filling the seat vacated by Sen. Kamala Harris (D-Calif.). Lacey is also running against Rossi, the first former public defender to run for the office.

In the race for the Board of Education’s 1st District, which encompasses most of central Los Angeles, incumbent George J. McKenna III faces write-in candidate Michael Batie. McKenna started teaching in LAUSD in 1962 and has served as superintendent of several other school districts. Batie is the CEO of the STEM Education and Research Collaborative, a forum for resolving issues in the areas of science and math education for communities of color.

Approximately 188 Superior Court judgeships throughout the county are also open this election cycle, according to the county clerk’s website. Races to watch include Superior Court Judge Seat 145, with contenders Adan Montalban, a prosecutor and deputy district attorney, and defense attorney Troy Slaten.

In Los Angeles, all officials representing even-numbered City Council districts are running for re-election in 2020. Incumbent David Ryu represents the 4th District, which includes the Miracle Mile, Hancock Park, Koreatown and Hollywood, among other neighborhoods.

Some of the main topics that candidates addressed at the forums were affordable housing and homelessness, which increased by 53% in the 4th District in 2018 compared with the city’s 16% increase during the same period.

Six candidates are vying for two seats on the Beverly Hills City Council.

Since Beverly Hills consolidated with Los Angeles County to administer this year’s election process, a new iPad-like voting system, which can only show four candidates at a time on its screen, will be used to cast votes and collect ballots. Voters must press the “more” button to scroll down and see the entire list of candidates for the council race.

In the California State Assembly, Rep. Richard Bloom, D-Santa Monica, is up for re-election  in the 50th Congressional District and running against documentary filmmaker and paralegal Will Hess and LAUSD technical supervisor Jim King. Bloom’s district includes the Miracle Mile, West Hollywood and Beverly Hills.

Measure R would amend the section of county code related to the Sheriff’s Civilian Oversight Commission by adding a plan to reduce jail population and provide alternatives to incarceration.

As a parcel tax measure, Measure FD would authorize the district to levy an annual parcel tax of six cents per square foot of structural improvements on property up to 100,000 square feet, excluding parking areas. A two-thirds supermajority vote is required for its approval.

Select polling centers are currently open throughout the county, and additional sites will open on Feb. 29. To find the location and hours of the nearest polling center, visit locator.lavote.net.