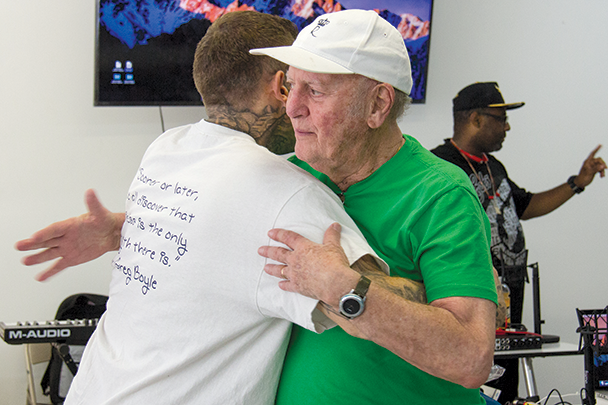 Since its launch in October 2017, the Mike Stoller Music Heals program has provided trainees at Homeboy Industries with instructors, space and resources so they can receive music education and experiences.

The Music Heals program’s namesake, Mike Stoller, a Rock & Roll Hall of Fame inductee and longtime supporter of Homeboy, came up with the idea for the program at a donor meeting after hearing a Homeboy trainee share his life story. The young man had been involved with gangs and found his way to Homeboy, but also mentioned that he played the trumpet, Stoller said.

He wanted to continue providing access for Homeboy trainees to music education and spontaneously told Walter Zooi, now the executive director of the Young Musicians Foundation, about his idea for the program.

“Music for me was something that I always loved,” Stoller said. “Walter leapt at the idea. He said, ‘I’m in.’”

Trainees at Homeboy have either been previously involved in gangs or incarcerated, and are involved in the organization’s Workforce Development program, according to Alison Lass, manager of media relations for Homeboy.

“One of the things we focused on early on at Homeboy was our old tagline: ‘Nothing stops a bullet like a job,’” Lass said.

In the last couple of years, Homeboy Industries’ staff discovered that people also need a way to heal from the chronic stress resulting from traumatic childhoods and incarceration.

“We have these areas where people can pursue their creativity in a healing-centered space,” Lass said.

Artists from the Young Musicians Foundation, which partners with Music Heals, serve as instructors for 25-35 trainees on any given day, said Martin Flores, who teaches drums and percussion for the program.

“For me as an educator, it makes me feel good. I look forward to it and it’s the highlight of my week,” Flores said. “It’s called Music Heals because it heals the trainees, but it heals [instructors] too.”

At the start of Music Heals sessions, everybody introduces themselves, talks about how they’re feeling or how their week is going, and participates in a group drum circle. Trainees then break off into smaller groups based on their interests such as guitar, singing and songwriting, keyboard, drums, and music technology and recording.

“They feel that having the ability to channel their emotions through music makes them feel like their voices are being heard instead of marginalized,” Zooi said. “Participants leave with a greater sense of connection to themselves and the world around them.”

Some trainees have gone on to pursue music or music production as a career. A trainee named Brandon, who graduated from the Homeboy program last year, was recognized by Snoop Dogg and given a scholarship to work alongside him and his organization, Zooi said.

“For the majority [of trainees], it opens their eyes and ears to a lot of things in the world beyond the life that they have had on the streets and in prisons, and I think that’s the most important thing,” Stoller said. “The participants respond amazingly.”

In the future, Stoller said he hopes to continue collecting instruments contributed to the program so that enthusiastic trainees can take instruments home, continue practicing on their own and share the joy of music with others. Zooi said he hopes to finalize a music production and media arts internship program this year.