Surprise, surprise, no game over for ‘Sonic the Hedgehog’ 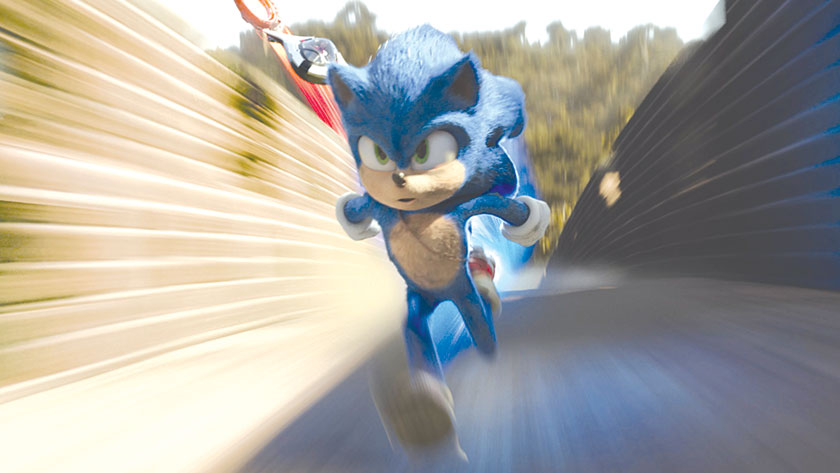 Ben Schwartz voices Sonic the Hedgehog in a new film about the adventures of the character who first appeared in a video game. (photo courtesy of Paramount Pictures)

The first anomaly of 2020 has arrived in the form of a blue mammal who debuted on the Sega Genesis in 1991. Frankly, when the first trailer for “Sonic the Hedgehog” rolled out last year, the whole endeavor seemed DOA.

To be honest, the inaugural promotion looked terrible. This interpretation of the ring-loving hedgehog lacked the unique characteristics of the animated character, residing somewhere deep in the uncanny valley, a freakish attempt at human qualities rather than an overtly cartoonish physique. Enough angry fans agreed, inciting a social media tornado of negative backlash.

Desperate to appease every corner of “Sonic” fandom, first-time feature director Jeff Fowler immediately announced revision plans. This quick announcement was a smart move but a sad moment that proved bullying pays off (just ask Lucasfilm). And now that “Sonic” sits atop the video game film adaptations at the box office, expect more bad behavior across the web moving forward.

Beyond CGI complaints, “Sonic” appeared to have other problems as well. To start, it’s yet another film that places alien or fantasy characters in modern-day America. Remember those “Smurfs” films? How about “Masters of the Universe” long before that? Producers apparently fear stories that don’t include Earth, so a stock story results, allowing animated characters to share the screen with human costars, in this case Tom Wachowski (James Marsden), a small-town sheriff hoping to patrol the busier streets of San Francisco. 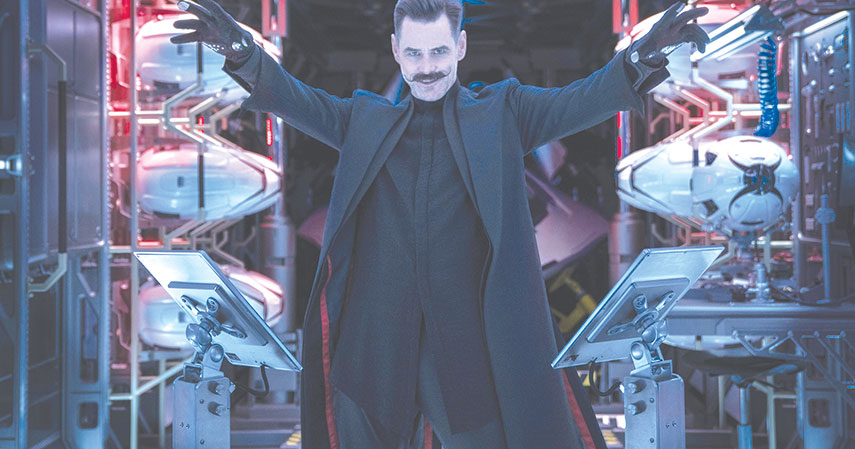 Jim Carrey returns to some of his classic comedy antics as the villain Dr. Robotnik in “Sonic the Hedgehog.” (photo courtesy of Paramount Pictures)

The second issue for “Sonic”: Jim Carrey plays villain Dr. Ivo Robotnik, going full ‘90s Carrey in the process. His take on Robotnik might irk a few diehard fans for such an egregious revision (if such a fandom actually exists), but the more pressing issue surrounds whether Carrey truly needs to revive his signature commedia dell’arte that birthed zany characters like Ace Ventura and Fire Marshall Bill.

To keep track: An iconic video game character adapted by a new director meets immediate backlash. The film employs a juvenile story that implies distrust of the material adapted. And the most recognizable star favors what might now be considered a rather dated acting technique. Despite all that, it all kinda works. Yes, it’s predictable, unoriginal even, but hardly unwatchable.

As expected, the plot line boldly goes where many others have gone before. For years, Sonic (Ben Schwartz, who once stole the show as Jean-Ralphio in “Parks and Recreation”) remained hidden on Earth, told at a young age that others might seek to exploit his unique abilities. This hints at the current villain’s motivation and what might draw other villains into future stories (yes, there will be more).

After Sonic accidentally reveals his abilities, the government sends its most brilliant and equally unstable specialist, Dr. Robotnik, who shirks any law or guideline to capture the hedgehog to study and dissect. Luckily, Tom, the only human who knows about Sonic, isn’t a clumsy sidekick, but a resourceful fellow with a plan. Together, the pair embark on a rather unlikely road trip in search of special rings (yeah, those rings) that allow travel between worlds.

“Sonic” certainly includes a few enjoyable action sequences, but the film most shines as a buddy flick. That’s mostly thanks to Marsden, performing alongside a CG character for a second time, “Hop” being the first. Sonic and Tom’s antics might feel like inconsequential, cutesy plot delays, but they’re actually the soul of a story about overcoming loneliness and finding family in unlikely places.

Marsden’s Tom also deserves special consideration. Rather than a stock everyman – a tired cliché to help initiate moviegoers into sci-fi stories with many expository moments – he receives his own story arc, character development and, most importantly, a quirky personality. The banter between Tom and the villainous doc lands particularly well.

As for Carrey’s throwback performance, it hardly flops. This tactic hasn’t worked for him in over a decade, but a family action film does the trick. All the greatest hits are back, from clenched-teeth delivery to flailing like his bones are rubber.

Comparably, “Sonic the Hedgehog” is like Steven Spielberg’s “Hook,” a critically disregarded family film beloved by broad audiences. If the goal was to establish a story that can grow across multiple films, then Paramount Pictures finally has a franchise that can advance with more certainty than many others in recent years. Hopefully the next outing will explore more off-world locales, perhaps a mushroom planet.