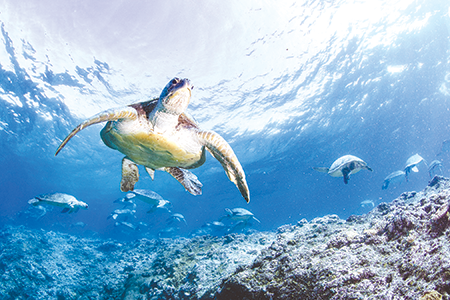 The new film “Turtle Odyssey” focuses on sea turtles and their role in the oceanic environment. (photo courtesy of the California Science Center)

The film, narrated by actor Russell Crowe, explores the unique lifecycle of an Australian green sea turtle named Bunji and its incredible journey across the open ocean. The film follows the green sea turtle from a hatchling into adulthood as it swims thousands of miles, meets incredible creatures and has wild encounters. The turtle eventually migrates with mysterious precision back to the beach where it was born to lay eggs that become the foundation of the next generation.

“We are tremendously excited to release ‘Turtle Odyssey’ at the California Science Center. Having Russell Crowe’s engaging voice combined with the immersive giant-screen format, this movie will take audiences on an unforgettable journey,” said Wendy MacKeigan, of SK Films, the distributor for “Turtle Odyssey.”

“We are pleased to bring ‘Turtle Odyssey’ to our theater and share this wonderful story along with the importance of protecting these special creatures who inhabit the planet with us,” added Jeffrey N. Rudolph, president and CEO of the California Science Center. “Guests will be able to enhance their experience by visiting our ecosystems kelp forest where they can enjoy seeing nearly 1,000 diverse marine animals.”

Sea turtles are some of Earth’s most ancient and majestic creatures. For over 100 million years, they have traversed the seas, endured mass extinctions and played critical roles in maintaining food webs. There are only half as many turtles in the ocean as there were 100 years ago. The biggest threat to their survival is not life in the wild, but in sharing their world with humans, according to scientists studying the turtles.