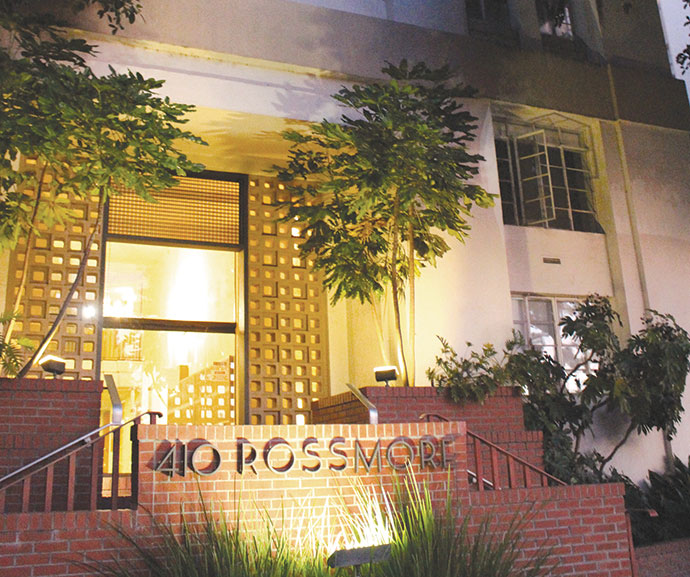 Built in 1930, the apartments located at 410 N. Rossmore Ave. are currently home to 54 residents. (photo by Morgan Keith)

On Feb. 25, nearly 80 people packed into a small room at Marlborough School for a Greater Wilshire Neighborhood Council meeting, with the majority being tenants of a rent-controlled apartment building at 410 N. Rossmore Ave.

The five-story building was sold last month by its previous owner, Grankol Inc., to Atlanta-based developers Domos Co-living. Although no designs were presented at the meeting by Domos co-founder and principal Daniel Alexander, tenants expressed concerns about being displaced.

Tenants will have to be relocated while upgrades are made to the building, such as seismic retrofitting and elevator upgrades. Alexander said the construction would take approximately two to three years to complete.

Debbie Chesebro, co-head of the building’s tenants association, said that she was told by a relocation specialist hired by Domos that the company is not responsible for helping her find a new apartment.

“We’re a little concerned with the practices, the letters that were sent out by this [relocation] company that was hired,” said Emily Howard, director of planning for Los Angeles City Councilman David Ryu, 4th District.

Howard said that tenants received “misleading information” from the relocation specialist hired by Domos, and that her colleagues consequently connected them with tenants’ rights organization Coalition for Economic Survival to outline their rights. Tenants must be relocated within a five mile radius of the building and be allowed to return to their individual units once construction is complete and pay the same rate, Howard said.

Of its 54 residents, Chesebro collected 42 signatures from people stating that they oppose returning to a building designed for co-living. Domos plans to expand the building to house 200 residents and will offer a mix of one-bedroom units and suites with shared living rooms and kitchens. Rent will remain within a few hundred dollars of current tenant rates, Alexander said.

“These units are hypermonetizing the per-square-foot dollar yield under the cloak of affordable housing,” Zanetti said.

“We are shooting to make an attractive, desirable neighborhood attainable for everyday people. There are developments in this city that don’t include people and displace people. We are on the opposite end of that spectrum,” Alexander said, adding that he wants tenants to return after construction and that the changes would benefit them.

Howard recommended that tenants meet directly with Alexander and Domos on relocation, rather than the relocation specialist, and notify Ryu’s office so a representative can be present. She also said that there is interest within the Los Angeles City Council in designating the building as a historic-cultural monument or Rossmore Avenue as a historic corridor.

“We have zero interest in living in an adult dorm or renting a bed, and that is not a housing model that fits the demographic of our building or neighborhood,” said Joy Wingard, a 10-year resident of the building.

GWNC member Philip Farha asked Alexander to continue bringing updates to the meetings after they hire an architect in March. In the meantime, he encouraged a “bi-directional process” and asked Domos representatives to get rid of its relocation specialist and gain back the trust of the existing tenants.