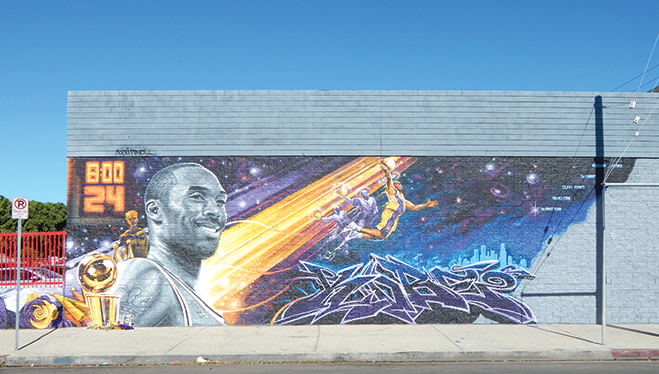 On Jan. 26, tragedy struck as a helicopter carrying legendary Los Angeles Laker Kobe Bryant, his 13-year-old daughter, Gianna, and seven others crashed in Calabasas. All nine people aboard were killed.

In the days since, Angelenos have come together to mourn a hero who united the city by winning five NBA championships, a father who was known as a model “girl dad” to four daughters and above all, a ruthless competitor who embodied the “Mamba mentality.”

Countless murals of Bryant have gone up around Los Angeles to honor Bryant, including one that adorns the West First Street side of the Custom Auto Craft building located at 100 N. La Brea Ave.

Eddie Melikyan, whose family owns the business, said he sought out graffiti artists to pay homage to Bryant, and he’s thrilled to have connected with Levi Ponce and his A-Team of fellow artists. Melikyan, a self-described Laker fanatic who watches games with his father, saw parallels between the nine people who died in the helicopter crash and a 2006 plane crash in Mexico that Melikyan survived, though his friend, actor and pilot Pablo Santos, did not.

“That was the first major loss of my life … So I can only imagine for Kobe and the rest of the people that passed away in that fashion, it’s just brutal [for their families],” Melikyan said.

Melikyan said since his crash, he’s searched for meaning, trying to make life better for himself and those around him, and this mural has had a positive impact on his community by bringing it together.

“People can come here and come together and be happy. People coming here, high-fiving each other, it’s amazing … My father’s been here for 35 years … in the last two days, I haven’t talked to as many people as I have in the last 35 years,” Melikyan said.

On Jan. 31, neighbor and Laker fan Susie Henzie traveled the three blocks from her home on Citrus Avenue to watch the painters work. She added that she told everyone in her exercise class to go see the mural, and she has been keeping up with other tributes to Bryant as well.

“This is really nice. It’s a nice corner and a lovely shop that’s been here for years,” she said.

Fans of Bryant turned the base of the mural into a shrine to Kobe and Gianna Bryant, leaving flowers, candles and other mementos, and several drivers have slowed down to take in the images created by Ponce and the A-Team, who created the mural for free.

Ponce said Bryant was “bigger than basketball” and “an L.A. icon.”

“I’ve been telling everybody he was basically a skyscraper in downtown L.A. and we lost the skyscraper,” Ponce said. “We’re missing him. There’s an absence in L.A. the equivalent to a skyscraper falling, and the rumble is kind of the same too, right? It was felt around the world.”

Fellow artist Kiptoe said Bryant’s death reverberated in the art community because he provided inspiration for so many.

“Being able to take what you’re passionate about, turning it into your career, your livelihood, that’s what we all strive for as young adults,” Kiptoe said. “And that’s exactly what he did, he went straight from high school to the NBA. You know that’s a guy who’s got a mission.”

Melikyan said he hopes others can glean lessons from Bryant as well. Though Bryant made mistakes – in 2003, he was charged with sexual assault; charges against him were dropped the next year and he settled a civil suit – Melikyan said Bryant persevered in his career and was a devoted father and husband before his death.

Bryant was noted for his support of Gianna in her pursuit of a professional basketball career, and the occupants were reportedly on the way to a youth basketball tournament.

“Like everybody else, he’s human,” Melikyan said. “Maybe his physical talents are different, but mentally, there’s a lesson here that people should cherish and be able to pass down from generation to generation, which I believe he was doing with his daughter. God knows what she could’ve become, and that’s what hurts me a lot, too.”