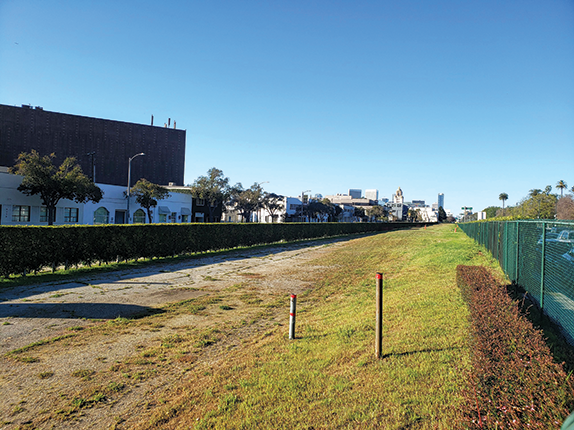 The proposed development of office space for companies in the entertainment industry on a 60-foot-wide strip of land in Beverly Hills is drawing some consternation.

Beverly Hills resident Robbie Anderson said he sent a mailer to approximately 1,800 homes warning about the development of Lots 12 and 13, located at 9200 Santa Monica Blvd., between Santa Monica Boulevard and Civic Center Drive, which is known as the Beverly Hills Creative Offices Project.

An application filed with the city in September by the Beverly Hills Land Company shows plans to build 11 buildings collectively totaling more than 100,000 square feet of office space on the land. If approved without changes, most of the 11 buildings, which are oriented in a straight line, would be four stories tall, with two three-story buildings on each end. Some of the buildings would be connected to their neighbors using aerial walkways, while others would not; however, all of the buildings would share a one-floor underground parking garage. As part of the project, some land – identified as Lot 13 and Lot 13A, a smaller parcel situated as a median in Santa Monica Boulevard – would be donated to the city.

Dale Goldsmith, a partner of Armbruster Goldsmith & Delvac and the BHLC’s listed representative, did not return requests for more information.

Anderson said he’s concerned about the buildings, as they will be tall enough to provide sightlines into the backyards of the homes across Santa Monica Boulevard, as well as the loss of dozens of metered parking spaces that abut the currently vacant lot, which until 2015, housed nearly 200 eucalyptus trees.

Anderson also said the land – which is currently zoned for transportation – would be better used for parking or ride-hailing pick-up and drop-off for the upcoming 2028 Summer Olympics in Los Angeles. The additional office space, he said, “doesn’t bring any quality to anybody.”

Anderson began his attack on the project before the developer completed its application. Beverly Hills Principal Planner Masa Alkire said after the project was submitted, multiple city departments reviewed the application, and they sent their questions and feedback to the applicant.

In a statement, City Manager George Chavez said the application was deemed incomplete in October, pending that additional information.

“Since that time, the applicant has not submitted new materials,” Chavez said. “If and when the application is deemed complete, the next steps would include an environmental review (where traffic and construction impacts would be examined) and public hearings.”

The environmental review will be particularly important, as the land, which was once a right-of-way for the Union Pacific Railroad, “has been identified as contaminated and, if development were to be approved for the site, there would be appropriate remediation,” Chavez said.

Alkire said even though the Beverly Hills Land Company owns the land, Union Pacific is responsible for cleaning up the hazardous materials found there, which a 2016 city study found to be higher-than-normal levels of arsenic.

Anderson said he’s starting his outreach now to avoid the multiple time-consuming and costly public hearings and meetings that will be held as the project moves forward. Alkire said the environmental review alone could take several months to a year.

Anderson said he’s confident that “once the people get the details in living color, they’re going to go ‘no … way this is going in’” and will attend the public hearings to make their opposition known.

“I’m trying to nip this in the bud before all these meetings with the residents and the commercial people,” Anderson said. “If people could just see what they’re going to do, they might have a different opinion of this. Why go through all the rigamarole that’s going to get shut down?”