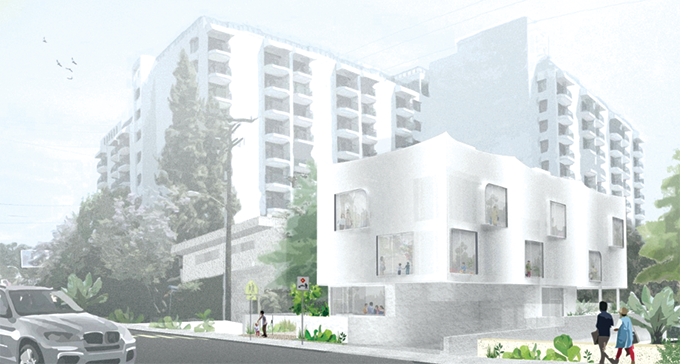 An appeal of a three-story preschool planned for San Vicente Boulevard was rejected by the West Hollywood City Council on Feb. 3. (rendering courtesy of Lorcan O’Herlihy Architects)

On Feb. 3, the West Hollywood City Council reaffirmed the Planning Commission’s September 2019 approval of a proposed three-story preschool at 972 N. San Vicente Blvd. and denied the appeal filed by Annette Kazmerski, who lives near the project site.

The applicant, Nasim Kablan, wants to build an 8,300-square-foot, three-story preschool for up to 72 students between 18 months and 5 years old.

The appeal was denied by a 3-1 vote, with Councilwoman Lauren Meister casting the lone vote to support the appeal. Councilman John Duran recused himself for a potential conflict of interest, as he lives near the site of the proposed preschool.

Meister echoed one of the most prominent complaints from Kazmerski and 10 other people who spoke or submitted comments during public comment: traffic from the school during drop-off and pick-up would back up onto San Vicente Boulevard, which is already impacted by the adjacent hotel, the London West Hollywood at Beverly Hills, as well as the nearby Sunset Strip, buses, delivery trucks, ride-hailing vehicles and regular traffic.

“San Vicente Boulevard with its slope and the traffic and the hotel right there, I don’t think it’s the right place for this project … it’s not the project itself, but it is the location,” Meister said.

Kazmerski also alleged that the project would encourage parents to park – sometimes illegally – in the nearby neighborhood, that a school is a bad fit for that location because the city is trying to put adult-oriented businesses, such as nightclubs and cannabis businesses, in the area, and that the project has safety concerns, such as crossing San Vicente Boulevard on foot, which can be hazardous.

“It is very difficult, even with the pedestrian crosswalk and light system that has been installed there, to get cars to stop or even slow down,” Kazmerski said.

The other council members did not deny that Kazmerski and the project’s other opponents had valid concerns; however, they said they thought Kablan and her traffic consultant, Diana Skidmore, managing director of Culver City-based Crain & Associates, had done an effective job demonstrating that the school’s staggered drop-off times would prevent too many cars from attempting to enter the underground parking garage at once.

“I think if we don’t allow for some degree of queuing in a school to allow for drop-off, we’re not going to have schools anywhere in West Hollywood,” Mayor Pro Tempore Lindsey Horvath said.

The council members added that the city needs schools – a sentiment echoed by nearly all of the project’s 14 supporters who spoke and even some of its critics – and the site is located across San Vicente Boulevard from West Hollywood Elementary School, casting doubt on some of the critics’ complaints about the proper site for a school.

Councilman John Heilman argued that some of the issues raised by the projects’ opponents would be still be issues at many other sites in the city.

“If they can’t go in residential [areas] and traffic is too big a deal, then we can’t put them in commercial [areas]. Where are we left to have a preschool facility?” Heilman said.

Mayor John D’Amico said the Planning Commission’s oversight – as conditions of approval, the commission required three-, six- and 12-month reviews of the school’s traffic impacts – might help allay some of the traffic issues and concerns by residents. Horvath said the preschool is likely to have a positive impact on West Hollywood.

“This school has an opportunity to really play a vital role in how we build community in West Hollywood,” Horvath said.

For your consideration: The only films that matter prepare to clash at the Oscars