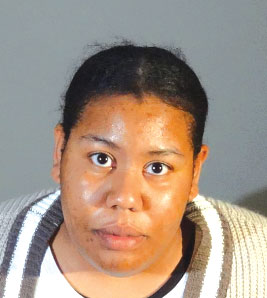 Authorities released a photograph of the alleged rental scam suspect, Courtney Lane Joseph and are asking any additional victims to come forward. (photo courtesy of the LAPD)

Police have arrested a 22-year-old woman for allegedly perpetrating a scam involving a stolen identity that was used to rent apartments in Hollywood. Authorities surmise there may be additional victims and are seeking information.

The suspect, Courtney Lane Joseph, was arrested in early February at her residence in Inglewood after police were notified by a Hollywood property manager about the alleged identity theft. Detective Patrick Aluotto, with the Los Angeles Police Department’s Hollywood Division, said the suspect attempted to rent an apartment on Santa Monica Boulevard using the Social Security number of a victim from San Francisco. The identity theft victim has the same first and last name of the suspect, but the middle name is different. Detectives are unsure how Joseph obtained the victim’s Social Security number.

Aluotto said Joseph allegedly used an authentic driver’s license and passport in January to rent the apartment, but submitted a fake Social Security card. When the property manager ran her credit, the victim in San Francisco was notified and called representatives of the rental company, who in turn called police.

Aluotto obtained a search warrant for the suspect’s residence and while there found evidence of another similar scam in which the suspect rented an apartment near Hollywood Boulevard and Vine Street. When investigators went there, they found the unit had been subleased to someone from China, but the occupant was gone. Aluotto has been unable to locate that individual.

Investigators believe there are other victims because the identity theft victim in San Francisco told authorities that four credit checks had been conducted using her Social Security number, leaving two unaccounted for. He encouraged people to use credit monitoring as a means of protection against identity theft.

“We have all kinds of rental scams, including people trying to rent apartments using other people’s identification. Usually they create an ID that is easy to recognize as fake,” Aluotto said. “I have never seen one where a suspect has gotten a victim with the same name and a Social Security number.”

Joseph was booked for identity theft and was released on $50,000 bail. She is scheduled to appear in court on March 3.

Hit-and-runs claim the life of elderly victim in Koreatown