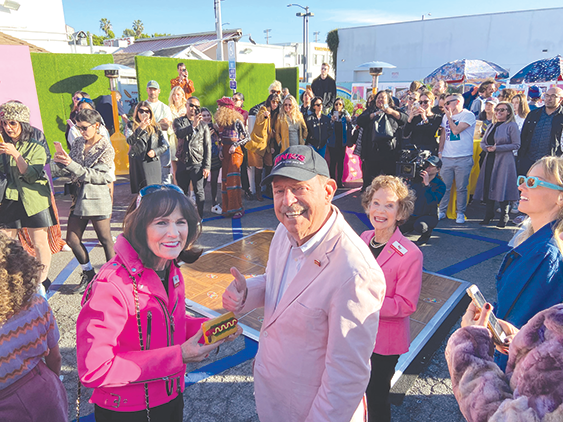 Gloria (left) and Richard Pink, and Beverly Pink-Wolfe, enjoyed the party at Pink’s Hot Dogs on Feb. 4 for the debut of a new clothing line from Missoni. (photo by Edwin Folven)

Every day, large crowds flock to Pink’s Hot Dogs on La Brea Avenue for one of their 36 varieties of hot dogs. On Feb. 4, crowds gathered at the stand for an additional reason: to see the latest fashions from the Italian purveyor Missoni, which held a party on Pink’s back patio to spotlight its M Missoni apparel line. Richard Pink, who operates the stand with his wife, Gloria, and sister, Beverly Pink-Wolfe, joined the party, which included a fashion show, hot dogs, music and fun. Missoni contacted Pink’s and requested that the party be held there because “they love America and Pink’s is quintessential Americana,” Richard Pink said.

“They were looking for a place where a lot of young people hang out, and they thought it would be a great place to launch their new fashion line,” Pink added. “It’s very cool, very hip. It’s a great vibe. The Missoni name is worldwide and internationally famous, and the Pink’s name is internationally well-known. It’s the overall atmosphere that Missoni felt blends well with their fashion name.”

The event included more than 100 influencers posting information about the new clothing. Pink added that it was a first for the stand, which was started in 1939 by Paul and Betty Pink, Richard and Beverly’s parents, and has grown into an iconic destination in Los Angeles.

“It’s the first time a fashion brand wanted to come to Pink’s and bring all their influencers,” Pink added. “It’s a fun spot. Pink’s known for a lot of energy, and it’s the energy of their brand, too.”