Navigating 30 years on the masthead 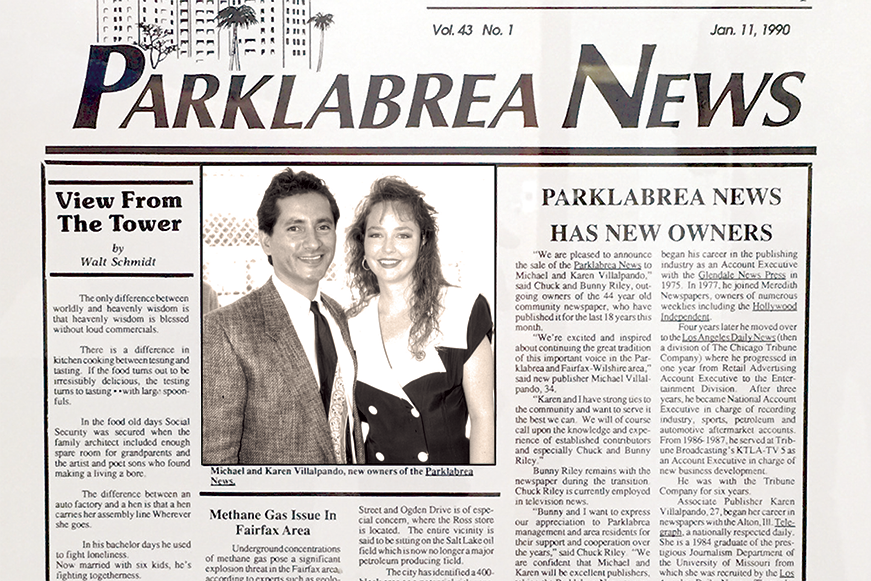 Elijah P. Lovejoy was an abolitionist and newspaper publisher in the 1830s in Alton, Ill., my hometown. A statue is erected there in his honor. My first newspaper job was at the Alton Telegraph, just a few blocks from the Lovejoy Monument where I was a receptionist and answered a rotary dial phone.  I took classified ads, and later became the assistant to the marketing director. In college, I worked at the Columbia Missourian while I earned my bachelor’s  degree in journalism from the University of Missouri. The Missouri School of Journalism publishes the Missourian, a daily newspaper circulated throughout the city. I edited news stories and sold advertising, and it was through the J-School that I landed my first post-college job at the Los Angeles Daily News.

On my first day at the Daily News, then located in Van Nuys and owned by the Tribune Company, I met Michael Villalpando. He started his newspaper career at Meredith Newspapers in Echo Park. Four years later we were married in May 1988, at St. Mary’s Church in Alton, just around the corner from the Telegraph building.

We left the Daily News to pursue other careers – Michael worked for movie producers and I was a marketing director – yet we longed for our newspaper days. We answered an ad for a newspaper for sale in Editor and Publisher, called Park Labrea News. After weighing our options, we took a second mortgage on our house and purchased the bi-weekly papers with a 3,400 circulation from Chuck and Bunny Riley.

We officially took over the reins on Jan. 1, 1990. Our first move was to hire Brian Boyé, fresh out of college from the University of Texas, as our editor. The three of us put in long days and longer nights to put out a 20 page newspaper. We handled all the reporting, editing, ad sales  – and cutting and pasting. As in using an X-Acto knife, running the copy through a waxer (anyone know what that is?) and pasting onto boards, which were delivered to the printer in a cardboard box. Well, most of the time. I remember one Thursday morning at 3 a.m. the phone ringing and the pressman asking, “Where’s the paper?” “You don’t have it?” I shrieked. I frantically called Brian, woke him up and he said “Oh my gosh, I drove home with it still in my trunk!” Needless to say, we were a little late getting the paper delivered that week. (Things are much more efficient since the invention of the internet.)

We inherited a few things besides the waxer when we bought the paper – an old typewriter, a steelcase desk and two real gems: Shirley Firestone and Madeleine Shaner. Shirley was our gadfly restaurant writer who knew everyone in town and especially loved the Italian restaurateurs. Her column often cited the origins of puttanesca.

Madeleine, on the other hand, was a well-heeled Brit, who knew grammar better than any English professor and could weave a yarn that warmed you like a comfy sweater. Her weekly Mad Musings column often spoke about her Seder dinners, her sons and Other Half (OH), husband John Shaner, a well-known playwright and screenwriter. She once told us how an out-of-work actor would sleep on their couch in exchange for babysitting their sons. John later rewarded him with a part in one of his movies. That actor is Jack Nicholson.

Madeleine and Shirley were part of the team when Brian came aboard as the editor. The three of us grew up together, Brian was 22, I was 27 and Michael was the patriarch at 34. Our offices at the time were upstairs in the “Dell” section at the Farmers Market, a former apartment hideaway, it was rumored. The fellas would sit out on the roof and enjoy a cold beer after our long hours of production. Brian was much more than an editor to us. He is our dear friend, and we are lucky to have him contribute to this issue. He also wrote both of our children’s birth announcements, newspaper covers which hang on our office walls to this day. Brian helped put us on the path to be who we are today, a significant local newspaper with a clear, unbiased voice.

Throughout the past 30 years, this office has had many journalists contribute to the newspapers, many graduating to high-profile careers. Megan O’Neil is now an editor at Bloomberg News. Ian Lovett is a reporter at the Wall Street Journal. He took his experience from the Park Labrea News and Beverly Press to the New York Times and then onto WSJ. Amy Lyons, who has graciously written a piece for this issue, went on to obtain her Masters in Creative Writing and is working on her first book. The aforementioned Brian Boyé spent nearly 20 years at Men’s Health as the fashion director and is now vice president at Nike Communications. 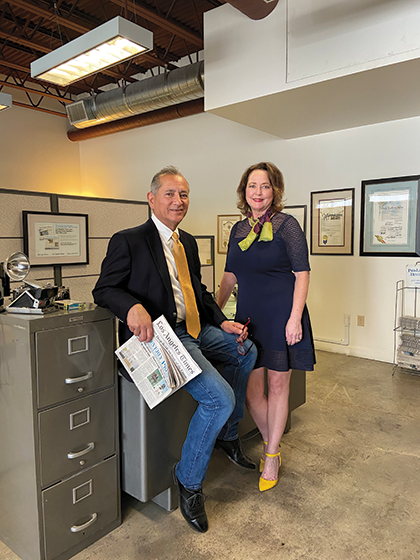 We are lucky to have a great staff now, including Edwin Folven, who has been at the papers since 1996. He has served as our editor for the past 15 years. Ed knows the neighborhood better than anyone and is a virtual encyclopedia on all things in the Miracle Mile, Hancock Park and West Hollywood. Tim Posada, our movie writer for the past dozen years, was once on staff as a reporter. He now is a journalism professor at Saddleback College and entertains us weekly with his critiques of the Silver Screen.

Jill Weinlein, our restaurant writer since 2010, tantalizes our taste buds each week with her restaurant news and reviews. Whether she delights us with tid bits about new restaurant openings or guides us through a multi-course dinner with wine pairings, Jill is the always vivacious and charming face of the newspaper among the culinary scene in Los Angeles.

Cameron Kiszla and Morgan Keith and those yet to come are young journalists who keep the community informed every week.

But the real heart of the newspaper is the community that has kept it going strong since 1946, when the Park Labrea News was started. As only the third owners, we’ve taken the responsibility as publishers to deliver the best in local journalism to our readers. Along the way we’ve been acknowledged by city councils and Assembly members, from John Ferraro, Zev Yaroslavsky, Tom LaBonge and Mike Feuer, to more recently David Ryu, Paul Koretz and Mitch O’Farrell. We were even placed on the Congressional Record by U.S. Rep. Henry Waxman.

The Park Labrea News and Beverly Press family extends beyond government. Families like the Gilmores, the Pinks, the Canters and the Magees played important roles in shaping the community. Trailblazer Steve Kramer created the Greater Miracle Mile Chamber of Commerce and homeowners’ groups saved historic neighborhoods by getting HPOZs declared for their neighborhoods.

Readers look to the Park Labrea News and Beverly Press each week to provide them with the latest news, crime, business and entertainment occurring in the area. We thank you, our readers, for your loyal support — keep reading! 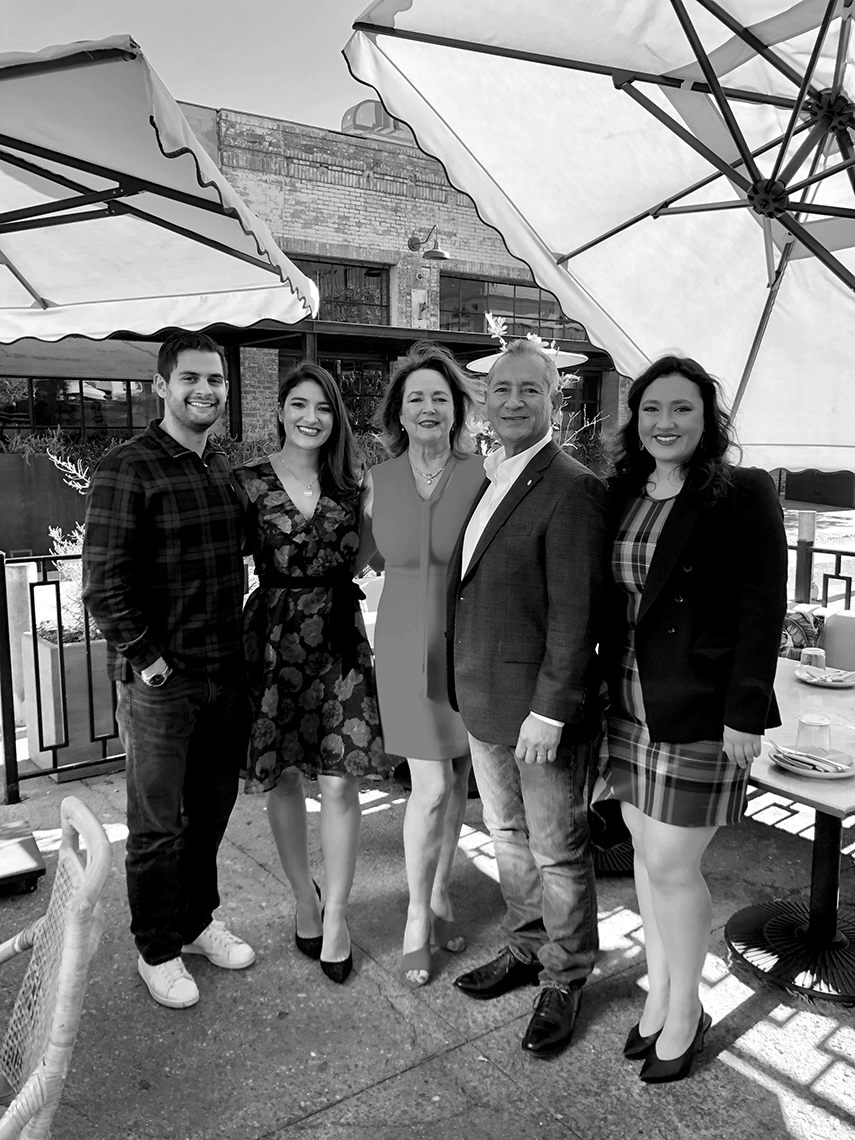 This photo is the Villalpando family, Rebecca, far right, Emily and her husband Michael Jilg, Michael and Karen.

What we’ve learned over the past 30 years couldn’t have been accomplished without the assistance of all of you. Yet there are two important people we’ve yet to mention – our daughters. Emily Marie Villalpando Jilg and Rebecca Claire Villalpando. Emily, who turns 28 today (happy birthday honey) and Rebecca, now 25, were nurtured by news, often over the family dinner table. They learned by osmosis what it takes to publish a newspaper every week. As children, they sometimes had to spend after school time in our conference room watching TV or doing homework on deadline days, but we always made time to enjoy weekends at the beach, road trips and vacations to Europe and Hawaii. Our two girls became accomplished leaders in high school, at their universities and in their careers. Both spent time working here, selling ads, writing stories and proof reading. Thank you! We couldn’t be more proud of the women you are today!

So what of this 30-year adventure? It’s a journey of which we wouldn’t change a minute. Our Notable Quotes this week sums it up.

“I think it would be fun to run a newspaper.”

Thank you to Brian Boyé, Chris Erskine and Amy Lyons for contributing to this special issue. We are grateful to all of the journalists who have graced these pages with their sound reporting over the past 30 years.

‘It’s called the Walk of Fame for a reason’

Getting ready for Oscar

I think former editor Geoff Martin’s scoop on Rabbi Loew was Pulitzer material. That kind of beat reporting is long gone. If only Martin knew how to play politics he’d be living on easy street; instead, he’s a broken man.