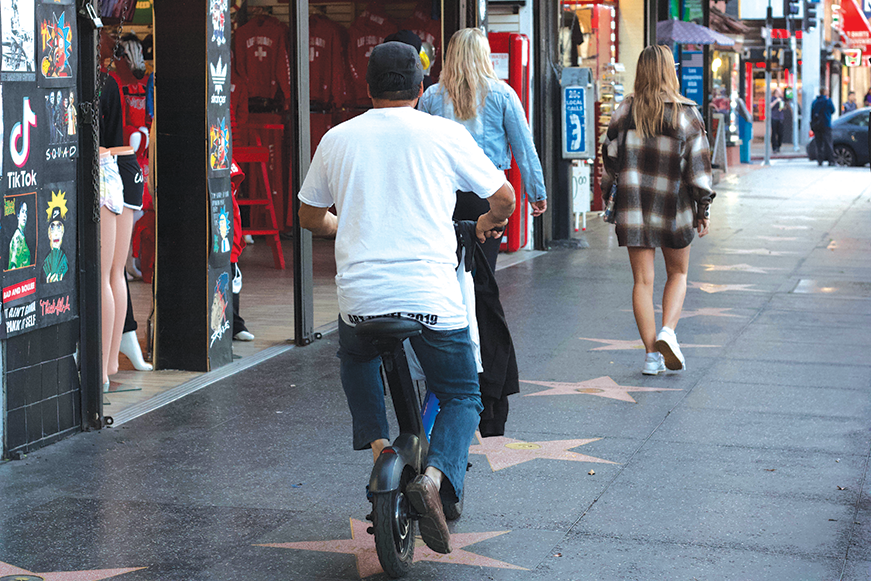 Instead of zipping up and down the Hollywood Walk of Fame on a scooter, tourists and Angelenos may have to stick to walking as Los Angeles City Councilman Mitch O’Farrell, 13th District, plans to restrict e-scooters and similar devices from the famous attraction.

The e-scooters were first allowed by the Los Angeles Department of Transportation in 2018 as part of its One-Year Dockless On-Demand Personal Mobility Pilot Program as a means of exploring an alternative method of getting around the city. However, O’Farrell proposed restricting the use of scooters for a 120-day trial period on the Hollywood Walk of Fame because the vehicles clutter the streets and pose a safety threat to pedestrians, he said.

The restriction would prevent the use of e-scooters on Hollywood Boulevard between La Brea Avenue and Gower Street, and Vine Street between Yucca Street and Sunset Boulevard, to keep the public right-of-way open, O’Farrell said.

“I want them to be geo-fenced for a trial period, and by the end of the period, the scooter companies will make up a plan for why we should keep them,” O’Farrell said. “I want them out of the Hollywood Walk of Fame. The scooters are driving down at 12 miles per hour and endanger pedestrians.”

O’Farrell requested the LADOT conduct a survey on potentially banning the e-scooters from the Hollywood Enter­tainment District using geo-fencing technology at a joint meeting for the Public Works and Gang Reduction and Transportation committees on Feb. 19. There is no set date for when the scooters will be geo-fenced from the Hollywood Walk of Fame and O’Farrell’s proposition will have to go through a process by the city.

LADOT uses geo-fencing technology to create a virtual perimeter in a specific geographic area, which allows e-scooter and bikes to send signals to the LADOT to inform them where they are located and whether any laws are being violated.

The city of Los Angeles adopted regulations in 2019 under the Electric Scooter Ordinance. O’Farrell supported the ordinance and the emerging transit options, but over time the lack of management, from scooter companies such as Lyft, Jump, Bird and Lime, and safety issues, have left them with no choice but to pursue a restriction in such a highly congested area, he said.

Rana Ghadban, president and CEO of the Hollywood Chamber of Commerce – which oversees the Walk of Fame, said that the priority has always included protecting and preserving the historic, cultural monument.

Kristopher Larson, president and CEO of the Hollywood Property Owners Alliance, agreed with O’Farrell and said, since the launch of the pilot program, it has been problematic.

“Currently, we have infrastructure that is not meant to accommodate that type of mobility,” Larson said.

Besides safety concerns for those on the sidewalks, there is a rising hazard for riders on e-scooters who move down intersections because drivers are looking out for pedestrians and pay less attention to scooters, Larson said.

Apart from the e-scooters being a potential hazard, there is growing frustration with the lack of management.

“We have scooters all over the sidewalk, which creates more issues for pedestrians and those with disabilities,” Larson said. “We have had our security team picking them up. We are picking up about 2,000 scooters, and about 61% of scooters are on the Hollywood Walk of Fame.”

Larson added that mobility choices are excellent and an opportunity for people to easily move throughout the district is something he wants, but there needs to be an infrastructure that can support it. Additionally, there needs to be a stronger understanding of responsibility among riders, he said.

Newspapers to be delivered on Friday, Feb. 28