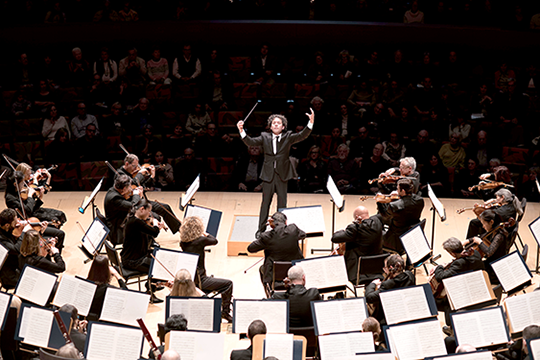 Music and artistic director Gustavo Dudamel will conduct 16 programs during the 2020-21 season. (photo by Ryan Hunter)

Under the leadership of music and artistic director Gustavo Dudamel, the LA Phil launches the Pan-American Music Initiative, a five-year celebration of the vision and creativity of artists from across the Americas. Over the life of the project, Dudamel and the LA Phil will invest in 30 commissions, recording projects, residencies and partnerships with Pan-American cultural institutions, and original collaborations with Pan-American artists across all of the LA Phil’s venues.

Each season will be shaped by an artist-curator, and the first year will be guided by Mexican composer Gabriela Ortiz. In the 2020-21 season, programs feature works by Revueltas and Ginastera, as well as new music by Erika Vega, Alejandro Cardona and Carlos Sanchez-Gutierrez in a Green Umbrella concert conducted by Lina Gonzalez-Granados.

“In these divided times, it has never been more important for us to remember all that unites us. This season, we look at America in its sprawling, wondrous complexity,” Dudamel said. “We explore the very nature of American identity and how these countless musical stories and ideas can all come together in this magical city of ours. We seek to build musical bridges, exploring how these bridges connect us across different communities, cultures and genres.”

“America: The Stories We Tell” is a year-long exploration of the ways in which narrative shapes our nation. Dudamel opens the focus with a world premiere from Puerto Rican-born multi-instrumentalist and composer Angélica Negrón.

Throughout the 2020-21 season, Dudamel will conduct 16 programs including Mahler’s “Symphonies 5 and 6,” Schoenberg’s “Transfigured Night” and John Adams’ “Nixon in China.” As part of his new Pan-American Music Initiative, he leads the complete score of Ginastera’s “Estancia,” accompanying a new full-length ballet by Brazil’s Grupo Corpo.

“Gustavo has been with us for more than a decade now, and in that time, he has widened our embrace of our Los Angeles community and of the world,” LA Phil CEO Chad Smith said. “In the 20-21 season, we welcome new voices and new perspectives from Latin America, East Asia, and our own backyard, while inviting new audiences to experience the wonder of Mahler, Beethoven, and Rachmaninoff.”

During the 2020-21 season, the LA Phil will tour, opening New York’s prestigious Carnegie Hall season in October, the orchestra’s first appearance there in 30 years. The philharmonic continues as the International Orchestral Partner for London’s Barbican Centre, performing exclusively at the Barbican in London and making it the orchestra’s London home in a partnership that began in 2010. There will be four performances in May as part of the orchestra’s annual residency, which will also combine creative learning programs, collaborations and partnerships.