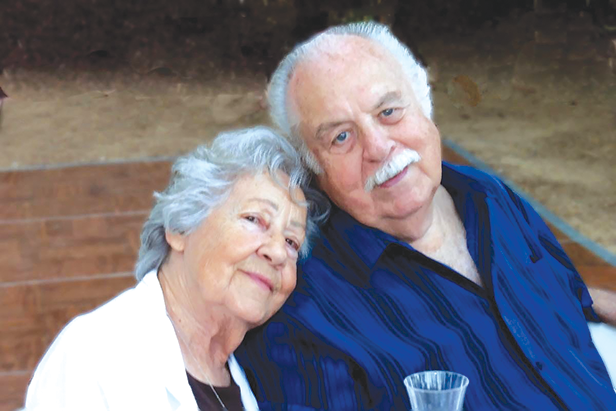 Dave and Rose DeRosa were remembered for their commitment to loved ones and the family business. (photo courtesy of Louis DeRosa)

Many people are mourning the deaths of Dave and Rose DeRosa, who died approximately six hours apart on Jan. 28-29 at the ages of 92 and 87, respectively.

Dave DeRosa was the longtime owner of Marconda’s Meats at the Original Farmers Market, and Rose was his wife of nearly 65 years. Rose passed away after a long battle with cancer, and Dave died hours later of natural causes. They were the parents of Marconda’s Meats’ current owner and operator Louis DeRosa, who worked with his father at the family business since 1979.

Louis DeRosa described his parents as loving people who cared deeply for family. He said his father was a skilled businessman who focused on quality meat products that customers could not find anywhere else.

Marconda’s Meats has been a family operation since opening in the Farmers Market in 1941. Dave DeRosa took over the business from his relative and original owner Fred Marconda in 1976.

A celebration of life for the DeRosas was held on Feb. 8 at the Farmers Market, with more than 100 people in attendance, DeRosa said. He reminisced fondly about his memories of his parents and said he misses them daily.

“I think they are together now, and that is where they would want to be,” DeRosa said. “I think he died of a broken heart.”

DeRosa, who operates Marconda’s Meats with his three sons, said maintaining a family business has contributed to the success of Marconda’s Meats. He said the business has many generations of customers and has served famous clients over the years, including former First Lady Nancy Reagan.

“Since my dad took over, we have always tried to source out antibiotic-free and humanely-raised animals,” DeRosa said. “Our motto has always been, ‘sell the best.’ Our quality is definitely not what you can buy elsewhere. We are not selling the same USDA Prime you can find anywhere else.”

“Dave DeRosa was a butcher’s butcher and will be remembered by all his customers and his Farmers Market family as a huge but caring and gentle man. When you shook his hand, it was like having yours enveloped in a catcher’s mitt,” Panatier said. “Yet that same hand was more skillful than a surgeon’s as you watched him prep the roast you just ordered. There are few other butchers like him but the Farmers Market is fortunate to have his son and grandsons carrying on his legacy.”

DeRosa said he plans to carry on the traditions and work ethic his father instilled in him and will keep Marconda’s Meats rooted in family.

“He taught me everything I know. He and a couple employees who worked with him took me under their wing and showed me everything,” DeRosa said. “It remains a family business. I know he would want it that way.”

The DeRosas are survived by Louis, their daughters Dianne Berglund and Druanne Johnson, and numerous grandchildren and great grandchildren.