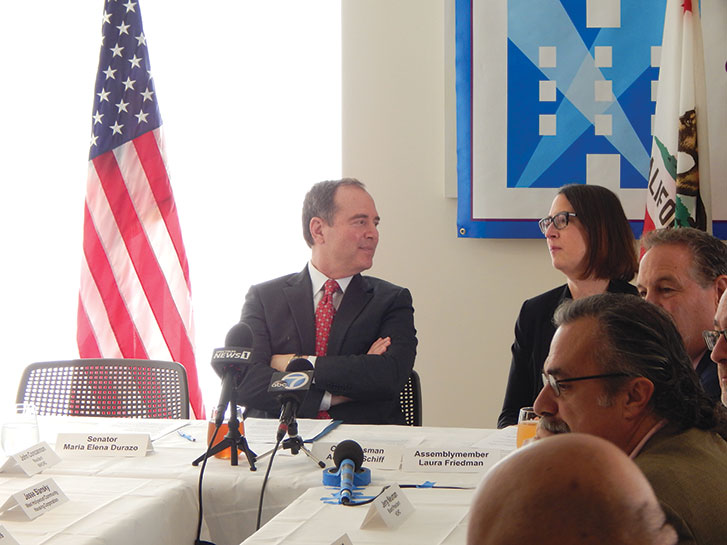 In East Hollywood on Feb. 21, U.S. Rep. Adam Schiff (D-Burbank) joined state lawmakers, representatives from multiple local cities, nonprofit leaders and residents of affordable housing to talk about a new bill Schiff is proposing and what else can be done to alleviate the housing crisis.

In the community room at the Coronel Apartments, located at 1554 N. Serrano Ave., Schiff, state Sen. Maria Elena Durazo (D-Los Ang­eles) and Assemblywoman Laura Friedman (D-Glendale) described housing as one of the most pressing issues facing their districts.

“As a society, almost every major challenge we face today has a nexus with housing,” Schiff said.

The attendees spent nearly an hour discussing how best to fund affordable housing to create lower rents and more units, which in turn would help alleviate the homelessness crisis in Los Angeles County.

“Subsidized housing will be part of the solution, and we have to put more resources into it, but we also have to find a way for the market itself to create units that are more affordable. It’s all hands on deck,” Friedman said.

Also present were three residents of affordable housing, including John Concannon, who lives in the Hayworth House apartments in West Hollywood, a property of the West Hollywood Community Housing Corporation.

Concannon said he was selected for one of 48 units in a “lottery” that was entered by approximately 3,000 people, and he feels fortunate to be able to continue to live in Southern California because of it.

“I’m so appreciative, but I do think of the other people, like where are they now? Where are the other almost 3,000 people? Somewhere. A lot of people I know, they have to go back to their home states,” Concannon said.

Participants also discussed how people in Southern California struggle to pay for more than just the rent. Even being able to buy food can be a struggle for some, like the community college students Schiff highlighted at a similar event at Los Angeles City College in September.

“We’re also going to have to do something about raising incomes,” Schiff said.

In the meantime, Schiff said he hopes Republican lawmakers and President Donald Trump will support his bill.

“An approach of using tax incentives to create housing and stimulate the market is one that both Democrats and Republicans should be able to embrace,” Schiff said.