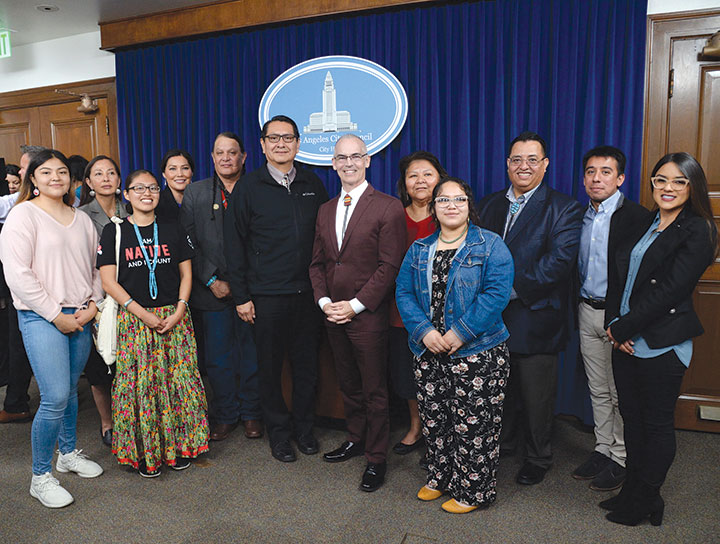 The Los Angeles City Council unanimously voted on Feb. 19 to conduct a feasibility study on implementing clean energy technologies at the former coal-fueled Navajo Generating Station, in which the city has an ownership stake.

Proposed by Councilman Mitch O’Farrell, 13th District, a member of the Wyandotte Nation and the first City Council member to belong to a federally recognized tribe, the motion expands on a decades-long energy partnership between the city and the Navajo Nation.

“Through this initiative, we are working with our partners in the Navajo Nation to obtain cost-effective renewable energy,” O’Farrell said. “I want to thank Navajo President Jonathan Nez for the continued collaboration. It’s going to take everyone everywhere to reduce energy consumption, and these initial steps will help us work toward the shared goal of slowing climate change.”

The motion directs the Los Angeles Department of Water & Power to report to council in 30 days on the feasibility of entering into a partnership with the Navajo Nation to produce clean, cost-effective energy at its generating station near Page, Arizona.

For 40 years, the city partnered with the Navajo Nation to generate energy from coal at the plant. LADWP, which owns the transition lines that run between Los Angeles and the generation site, will report back with options on how to harvest solar, wind and hydro energy at the site, as well as the potential costs and benefits for ratepayers.

“We know that in the coming years, we’re going to stop renewing lots of contracts with our vendors based on our clean energy goals for L.A., and we’ll probably accelerate our 100% clean energy plan,” O’Farrell said.

The city decided not to renew the contract at the generation site and has divested from coal-fueled energy to meet its 2025 climate goals. Because the contract was not renewed, others followed suit and the site closed, O’Farrell said, adding that it threatens the economic stability of the Navajo Nation.

“There are over 50,000 Native Americans living within the city of Los Angeles. Of those, a large majority are within the Navajo Nation,” Nez said. “The Navajo Nation is 350,000 members, 27,000 square miles, and we are here today to ask for the City Council’s support to enter into this partnership once again.”

LADWP will be organizing a trip to the generating site to meet with representatives from the Navajo Nation and explore next steps together. The clean energy from the plant could supply enough fuel for an entire City Council district, O’Farrell said.

“I hope that other energy producers will take notice and put plans together to engage in similar shifts. Science is real, climate change is real. Angelenos know this.”