L.A. Zoo’s new baby gorilla determined to be a girl 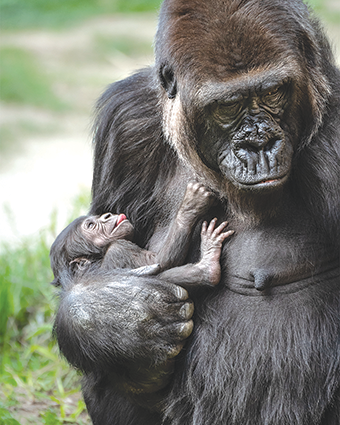 The Los Angeles Zoo has announced that the first western lowland gorilla born at the zoo in more than 20 years is female.

After three weeks of bonding and clinging tightly to her mother, N’djia (en-JEE-uh), animal care staff were able to confirm the baby’s sex. The gorilla was born on Jan. 18 to N’djia, 25, and Kelly, 32.

“The last few weeks have been so exciting watching first-time mom N’djia with her new baby,” said Beth Schaefer, director of animal programs at the L.A. Zoo. “Having gorillas in our zoo is so important so we can connect Angelenos to the amazing biodiversity that exists on this planet and to help ensure that these beings will never go extinct. Like with humans, each mom and baby are different, so some are adventurous and test boundaries earlier, while others stay close for a longer amount of time. We hope guests are enjoying this journey as much as we are.”

For the next four to six months, guests can expect to see the baby clinging to N’djia while nursing and observing her surroundings. The father, Kelly, will watch over N’djia and their baby girl while the rest of the troop observes and remains at a respectful distance, according to zoo staff.

N’djia came to the L.A. Zoo in 2018 from the San Diego Zoo as part of a breeding recommendation through the Association of Zoos and Aquariums’ Species Survival Plan program. After L.A. Zoo’s animal care staff observed N’djia breeding with Kelly, they confirmed her pregnancy through a series of at-home pregnancy tests. “Every birth is a celebration, both in zoos and in the wild,” said Candace Sclimenti, curator of mammals at the L.A. Zoo. “We are thrilled about this baby because she will provide additional attention to this critically endangered species. The L.A. Zoo has the unique opportunity to teach the public about conservation and what they can do to save animals from the threats they are facing in the wild.”

Western lowland gorillas are considered critically endangered in the wild due to illegal hunting, susceptibility to diseases and habitat degradation and destruction. Despite the fact that all killing, capture and consumption of great apes is illegal, hunting for bushmeat is the primary reason for the western lowland gorilla’s decline.

This species of gorilla is native to the lowlands and swamp forests of Cameroon, Central African Republic, Equatorial Guinea, the Democratic Republic of the Congo, Gabon and Angola.