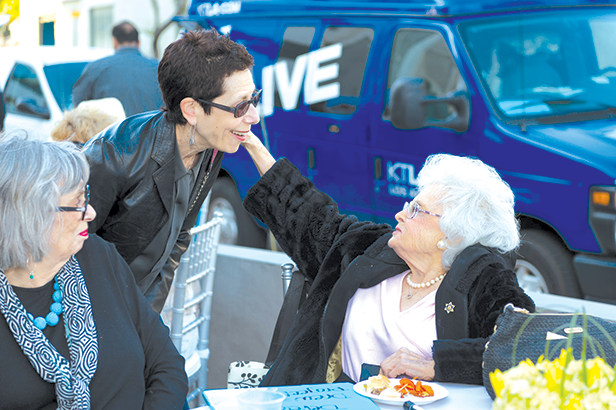 Longtime community advocate and West Hollywood resident Jeanne Dobrin died at the age of 99 on Jan. 31. In her honor, the West Hollywood City Council ran a slideshow before its meeting on Feb. 3, showcasing pictures of Dobrin over several decades.

Manny Rodriguez, vice president of the West Hollywood West Residents Association, said that Dobrin likely attended more City Council meetings than Councilman John Heilman, who has served on the council, with the exception of two months, since West Hollywood established its cityhood in 1984.

“She was an amazing lady and I choke up talking about her because she was a tremendous, strong voice for the city,” Rodriguez said. “She’d give them hell. She was very opinionated and said how she felt about just about everything.”

Dobrin had her own unofficial seat in the front row at council meetings so she could see closed captioning on the TV screen, which she spearheaded the effort to implement.

“I think we all know that Jeanne was complicated and that she could be a total pain in the behind. She relished that and enjoyed doing that at times,” Heilman said. “I had the opportunity to observe her and see her for over 35 years. I can tell you she had this deep love for the city. Even when I didn’t agree with her, I knew she was doing what she believed was in the best interest of the community.”

Larry Block, a friend of Dobrin’s who spent lots of time with her during her final years, played a clip at the meeting of Dobrin talking about how candidates running for local elections should be community-oriented. In the clip, she spoke about her passion for issues about over-development, the homelessness crisis, helping veterans and anything affecting West Hollywood.

“I care about this city and I want you to care about it too,” Dobrin said, her voice echoing throughout the council chambers.

Block bought a pink hat from Dobrin’s estate sale that was adorned with her pin collection for Councilwoman Lauren Meister, whom he said she would have wanted to have it. Meister met Dobrin at a West Hollywood West meeting over 20 years ago.

“Anyone she thought loved the city as much as she did, she would do anything for,” Meister said.

It was commonplace for Dobrin to forge friendships at municipal meetings. Elyse Eisenberg, who met her at a Planning Commission meeting 15 years ago, said that Dobrin sent emails and kept up with news on the Internet well into her senior years.

“I know everyone knows how smart Jeanne was and how she talked on everything [at council meetings], but I don’t know that people really appreciated how unusual it is to have such a sharp mind so late into her years,” Eisenberg said. “She’s a big loss.”

When she wasn’t attending meetings, Dobrin loved to play with her cats, paint, quiz her friends and go to the 99 Cents Only Store, Block said. The pair would frequently go shopping together and have conversations in her home by passing a dry erase board back and forth since she was partially deaf. On her bedside table at her nursing home, she kept a picture of the City Council members at the West Hollywood Library.

“She was very loving, sweet and gentle,” Block said. “She had that side that people would never see at a City Council meeting.”

Block met a resident who came to the City Council meeting because Dobrin had saved their home by filing a lawsuit against a developer, and the only reason they are able to still live in the city is because of her.

“Clearly, Jeanne was a force of nature, and we all witnessed that here in these council chambers and everywhere throughout the community,” Mayor Pro Tempore Lindsey Horvath said. “Every time you take that moment to be engaged in the city, you’re honoring her work and her legacy as well. Long live Jeanne Dobrin.”