‘It’s called the Walk of Fame for a reason’ 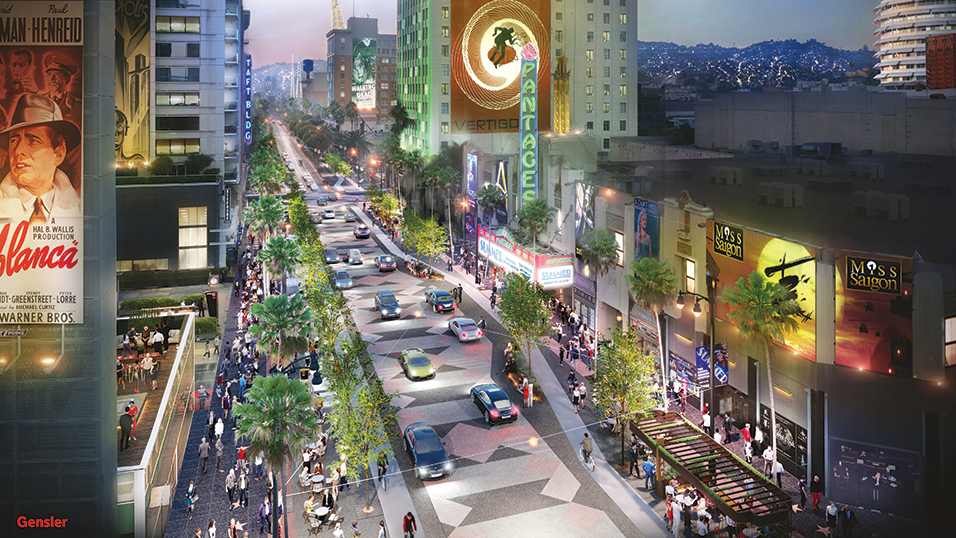 City Councilman Mitch O’Farrell’s plan to redesign Hollywood Boulevard and the Walk of Fame would remove two traffic lanes in exchange for an expanded sidewalk. (rendering courtesy of the Council District 13 office)

A proposal from Los Angeles City Councilman Mitch O’Farrell, 13th District, could lead to major changes for one of the city’s most well-known landmarks.

“I have a pretty strong feeling that we haven’t reached near our full potential on Hollywood Boulevard,” O’Farrell said.

Part of his HEART of Hollywood initiative – HEART stands for history, economy, arts and architecture, renewal and tradition – O’Farrell’s plan seeks to highlight those qualities. The plan envisions wider sidewalks with more space for pedestrians so they can more fully experience a newly repaired Walk of Fame or enjoy a meal or coffee at a sidewalk café. It also plans to plant more shade trees for a more pleasant environment and to install signage to alert visitors to points of historical interest.

“The sidewalks, in certain places already, aren’t wide enough to accommodate all the people who use it. We can have a world-class experience on the boulevard,” O’Farrell said.

Along with more space for pedestrians, the plan envisions areas for bicyclists and users of alternative transportation, and only one lane of car traffic in each direction and a middle turn lane.

The streetscape would also be redesigned in the Art Deco style, which the report said “has a strong connection to Hollywood history and culture.”

In addition to fewer cars being on the street, 12 intersections on Hollywood Boulevard are proposed to be raised, and enhanced paving would be used to indicate to drivers that they are nearing a pedestrian-priority area, the plan document said. O’Farrell said the concept plan would also enhance pedestrian safety, which he called his “No. 1 priority.”

“I would argue that it’s time for us to invest in the public space like we’ve never done before, that is to value the space that we all collectively share. Extend the sidewalks, encourage uses like sidewalk dining and taking a more leisurely stroll, have an ability to activate the spaces that we can enlarge for foot traffic and for people to take a stroll and enjoy the boulevard more and, at the same time, value the landmark that it is,” O’Farrell said. 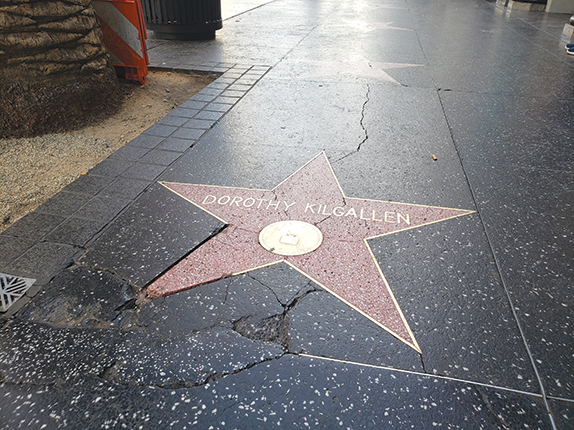 The plan to redesign the Walk of Fame would repair damaged stars and the surrounding terrazzo. (photo by Cameron Kiszla)

Kristopher Larson, president and CEO of the Hollywood Property Owners Alliance, praised O’Farrell, the Council District 13 office and Dan Halden, director of the HEART of Hollywood initiative in O’Farrell’s office, for their work in marrying interests that can sometimes compete, and that work will have to continue as more public input is sought.

“We have to make sure we finesse that desire to maintain and preserve this monument, but we also have to acknowledge that this is one the rare places where people travel from across the globe to take pictures of the sidewalk. It’s also a transportation corridor and a commercial asset and an attractor of business. There’s a lot of tension in that … but I think this is a really great first step in advancing this dialogue,” Larson said.

The plan “addresses some of the real pinch points in Hollywood,” such as the multiple ways a large number of people try to use the same limited space, resulting in competition, Larson said.

“It’s called the Walk of Fame for a reason. That is the way that ultimately people want to experience that monument, as a pedestrian,” Larson said. “As we think about approaching this as a design perspective, it’s about how you prioritize that pedestrian experience … It makes sense to open it up and let people experience that environment.”

The concept plan was created with input from stakeholders, and it will continue to receive public input going forward. Anyone interested in looking over the full 90-page plan and providing feedback can visit heartofhollywood.la.

O’Farrell said he hopes to incorporate the public input and get a timeline for potential phasing and construction in the next two years. The idea will ultimately be considered by the full City Council, which will need to sign off on the project.

“We’re looking at his very, very deliberately and not with haste,” O’Farrell said.

But if this project is done right, O’Farrell said a revamped Hollywood Boulevard could rival some of the great pedestrian areas – and tourist attractions – in the U.S. and around the world. As inspiration, O’Farrell cited Chicago, Barcelona and the Champs-Élysées in Paris.

“These are the models we can look to and envision a Hollywood Walk of Fame that we can all be proud of as our world-class boulevard,” O’Farrell said.

Navigating 30 years on the masthead