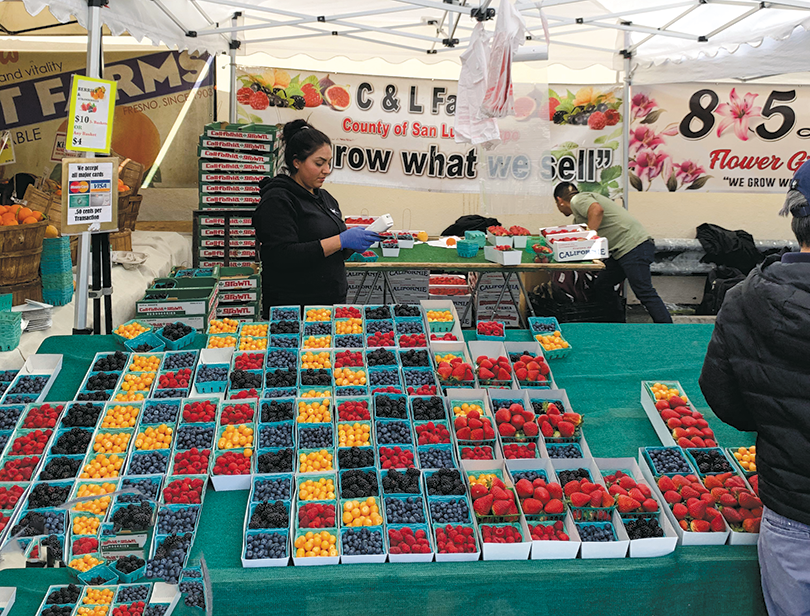 The Larchmont Farmers’ Market is one of 22 markets operated by Raw Inspiration. (photo courtesy of Gary Gilbert)

As the number of vendors at the Larchmont Farmers’ Market continues to increase, squeezing into the 32-space parking lot at 209 N. Larchmont Blvd. is becoming more difficult. Now, six of the spaces will soon be transformed into a playground and pocket park.

Los Angeles City Councilman David Ryu, 4th District, introduced a motion in May 2018 for the city to acquire the spaces for the pocket park. Since then, discussions have been ongoing with Raw Inspiration, the nonprofit that runs the Farmers’ Market, about how it can continue business during the park’s construction, according to Ryu spokesperson Mark Pampanin.

However, space remains a concern with the market’s rapid growth, and it may soon be forced to find a new location.

“They’re growing quite large and that parking lot is only so big. We love the Larchmont Farmers’ Market and want to ensure that it continues to grow,” Pampanin said, adding that if the market were to move, it would remain in the Larchmont area and be accessible to residents.

Raw Inspiration is exploring the feasibility of shifting the market to an open-street layout like that of the Hollywood Farmers Market, which takes place at the intersection of Selma and Ivar avenues.

Windsor Village residents Bruce Beiderwell and Ivna Gusmao said in a letter to Ryu that moving the market to a larger space would not benefit small vendors who have cultivated strong neighborhood relationships over time.

“This seemingly small ‘improvement’ has potential to significantly diminish – not enrich – the surrounding community,” Beiderwell and Gusmao said. “Reducing available space in the parking lot means reducing space for the weekly Farmers’ Market held every Sunday, and a smaller space for the market may prompt market managers to find another location.”

Louis Eafalla, owner of the Village Heights shop on Larchmont Boulevard, said he is worried that changing the market’s location will affect nearby businesses.

“It would be a devastating loss to all of us who count on the added traffic and business that [the market] brings in,” Eafalla said. “Brick and mortar business gets tougher every year. To even consider removing something that generates traffic and dollars to the street would be a misstep, to put it mildly.”

Pampanin said the discussion with the Farmers’ Market about spacing has been going on for years and is not connected to the playground and park. The proposal for the project was created by the Windsor Square Association and other neighborhood groups at the end of 2017.

“The Sunday market’s continuing status has always been a given,” said John Welborne, vice president of planning and land use for the Windsor Square Association. “The market’s management has known about the loss of these six parking/tent spaces since early 2018 … and did not object.”

Welborne spearheaded the proposal for the park and received letters of support from neighborhood organizations, including the Windsor Square, Larchmont Boulevard and Hancock Park Homeowners associations.

Cindy Chvatal, president of the Hancock Park Homeowners Association, received information from Welborne about the project, although she said he did not mention any potential impacts that the project would have on the market. No formal meeting was held between Welborne and the association, Chvatal said.

“I think that the community loves the Farmers’ Market, and I’m really hopeful that something can be worked out,” Chvatal said.

Greater Wilshire resident Gary Gilbert said the park could keep cannabis dispensaries off of Larchmont Boulevard and away from Marlborough School, located two blocks away.

Under voter-approved Prop­osition D, marijuana dispensaries cannot be located within 1,000 feet of a school and 600 feet of a child care facility, youth center or park. Once built, the park would disqualify dispensaries near the market’s portion of Larchmont.

“The real intention [behind the proposal] is to try and keep cannabis off the streets. There are other ways to do that aside from manipulating the law,” Gilbert said. “We need to temporarily postpone any construction on the mini-park until all the market issues are resolved. It’s become a giant mess.”

While Welborne said there is an unlicensed shop currently operating near Larchmont Boulevard and Melrose Avenue, it is a separate issue from the market and project discussion, which has been happening for two years.

“There has been lengthy and wide dissemination of the proposal, and it has been warmly received,” Welborne said.

Gilbert said he hopes that Ryu’s office will hold a community forum that is widely publicized to the market’s surrounding neighborhoods so that all issues can be ironed out with residents present.

“It really is a family feeling, and now there’s a chance we’re going to lose it,” Gilbert said.

Here’s a potential name for the “pocket playground:” “26 Tailpipe Park.”