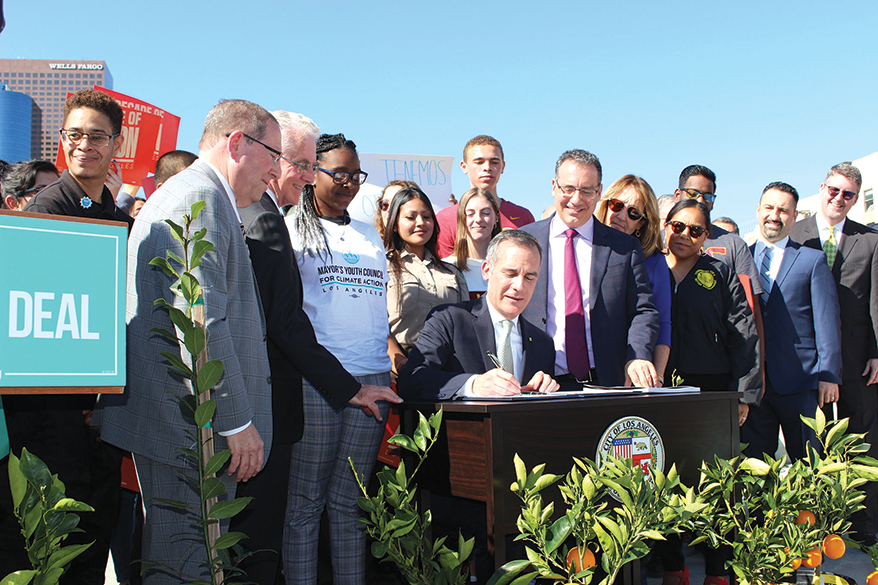 Los Angeles Mayor Eric Garcetti signed an executive directive on Feb. 10 known as “L.A.’s Green New Deal: Leading By Example,” which will guide the city’s efforts over the next decade to reduce carbon emissions and address climate change.

“The science could not be clearer and the stakes could not be higher. We must act this decade to save the planet and create a more equitable, prosperous and healthy future for our children and grandchildren,” Garcetti said in a statement. “There is literally no time to waste, because what we do in the next 10 years will determine the health of our planet and whether there’s a job, a paycheck and a place for everyone in our economy.”

Goals outlined in the plan will be implemented in the coming years. The directive was praised by many local civic leaders, including City Councilman Paul Koretz, 5th District, who joined Garcetti downtown at a signing ceremony for the directive.

“It is clearly up to cities to lead the way,” Koretz said. “It is the City Council’s solemn responsibility to strongly support [the mayor’s] executive directive and help him lead the most aggressive, most forward-thinking and most compassionate slate of legislation to reduce all our greenhouse gas emissions and do it in such a way that supports our most vulnerable communities and provides good, well-paying jobs.”

“Los Angeles doesn’t back down from big challenges, we rise to meet them,” Ryu said. “I’m glad to see our mayor continue to lead the way to a sustainable and climate resilient Los Angeles, and look forward to working with him and our entire city family on addressing climate change for all of our communities.”

Garcetti’s directive aims to put the city on track over the next decade to reduce the city’s impact on climate change. It is part of his “2020 Vision for L.A.’s Future” agenda.

The plan calls for making Los Angeles City Hall a zero-waste facility by 2025, and mandating that new construction and renovations of municipal buildings be carbon-neutral. Additional goals for buildings and infrastructure include expanding clean energy options for low-income and multi-family housing and ensuring all new projects and those undergoing roof renovations utilize “cool roofs,” which reflect sunlight and absorb less heat.

With transportation, the mayor’s goals include bus and light rail infrastructure improvements such as bus only lanes and signal priority and queue jumpers for public transit modes, with the goals of boosting commute times by 30% by 2028. The mayor envisions more “active transportation” corridors with new bike lanes and pedestrian spaces, and the inclusion of more micro-mobility modes such as e-scooters. The plan also calls for the city’s bus fleet to be entirely comprised of zero emission vehicles by 2028, and Metro to develop a pilot program for congestion pricing for areas heavily impacted by vehicle traffic. Congestion pricing involved surcharges for vehicles entering those areas.

The mayor’s plan also asks city pension boards to potentially divest from fossil fuel companies and promotes more investment in the green economy. Koretz and Ryu are currently calling for city divestment from Brazilian companies involved with deforestation in the Amazon region. Consideration of a motion on that divestment was continued at a City Council meeting on Feb. 12, said Ryu’s spokesman Mark Pampanin.

Many other leaders and organizations endorsed the mayor’s new directive as a step forward for the future.

“Climate change is the existential crisis of our time, and I’m proud to join Mayor Garcetti in putting forward a bold new environmental agenda to help take it on,” said City Councilman Bob Blumenfield, 3rd District, chair of the council’s Public Works Committee. “From divesting from shortsighted peddlers of fossil fuels [and] rethinking how we build, to continuing the growth and maintenance of our urban tree canopy, we are telling Washington, and the rest of the world, that Los Angeles is not afraid to take bold action to save our planet.”

“We’re incredibly proud of Mayor Garcetti’s leadership and our city collectively as we embrace the building policies needed in this decade of action against climate change,” added Ben Stapleton, executive director of the U.S. Green Building Council-Los Angeles. “Increased transparency around how we build our buildings combined with [better] electrification, while our grid moves to 100% renewable energy, will go a long way in reducing our local carbon footprint.”

Others said they support the mayor’s plan, but it doesn’t go far enough. The Coalition for Clean Air, which is focused on air quality issues statewide, said more needs to be done to reduce diesel emissions from commercial transportation involving trucks and ships.

“L.A.’s Green New Deal has many commendable provisions, particularly at it relates to passenger vehicles and transit, building efficiency and improved government operations,” said Chris Chavez, policy director for the Coalition for Clean Air. “In order to be a true climate leader and bring clean air to our most vulnerable, environmentally burdened communities, however, Mayor Garcetti and the city of Los Angeles must do more to clean up the goods movement system.”