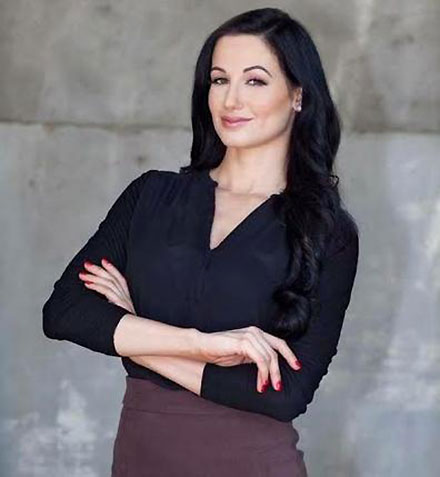 Amie Harwick, shown in a photograph on her website, was murdered on Feb. 15. Police believe the homicide was committed by an ex-boyfriend. (photo by Victoria Allen)

A 41-year-old man has been charged for the murder of a marriage and family therapist who was found dead at her Hollywood Hills home on Feb. 15.

The defendant, Gareth Pursehouse, was initially taken into custody at his residence in Playa Del Rey the same day police found the body of Amie Harwick outside her home in the 2000 block of Mound Street, just off Vine Street and northeast of the Hollywood (101) Freeway. Authorities described Pursehouse as a former boyfriend of the victim.

Pursehouse posted $2 million bail and was released on Feb. 18, but was rearrested the following day on a no-bail warrant after the Los Angeles County District Attorney’s office filed charges. Pursehouse faces one count each of murder and first-degree residential burglary, with the special circumstance allegation of lying in wait. He could face the death penalty if convicted.

The homicide allegedly occurred during the early morning hours of Feb. 15. Officers received reports of a woman screaming and arrived at approximately 1:15 a.m. to find Harwick’s roommate waiting in the street outside the residence. The roommate told officers that a man had entered the residence and attacked Harwick, 38. The roommate fled, jumped a wall and asked a neighbor for help.

Officers forced entry and found Harwick unresponsive on the ground beneath a third-floor balcony. Los Angeles Fire Department paramedics took the victim to a hospital, where she later died.

Investigators found signs of forced entry and evidence that a struggle occurred inside the residence. Detectives also found security camera footage of an intruder believed to be Pursehouse entering and leaving the residence, police said. The district attorney’s office alleges Pursehouse threw Harwick over a balcony at her residence.

Investigators have determined that the victim had previously filed restraining orders against Pursehouse and that Harwick had seen him during a chance encounter two weeks ago, police said.

Harwick was a licensed marriage and family therapist specializing in psychotherapy and sex therapy, according to her website. She had an office on Santa Monica Boulevard in West Hollywood and was the author of a book titled “The New Sex Bible for Women.”

Harwick was also formerly engaged to television personality Drew Carey, host of “The Price Is Right.” Producers of the game show announced that tapings would be postponed this week, according to media reports.

“I hope you’re lucky enough to have someone in your life that loves as much as she did,” Carey said.

Driver sought for hit-and-run at Third and La Brea