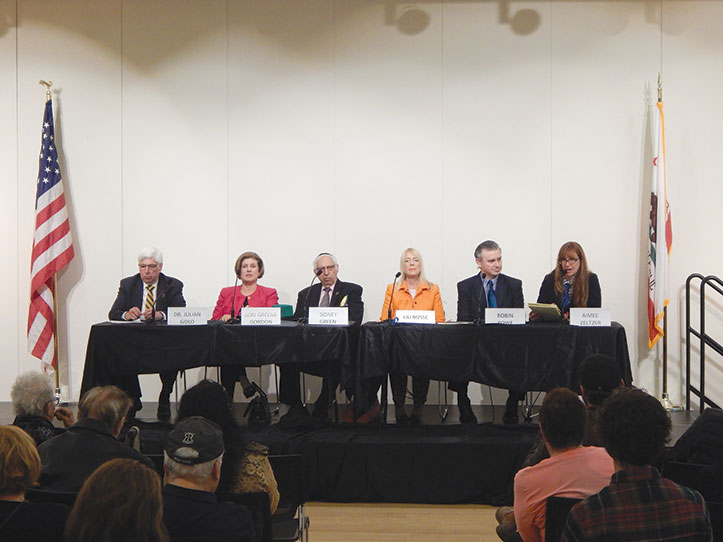 On Feb. 24, the Beverly Hills Active Adult Club’s City Council Candidates Forum provided the final chance for the six hopefuls to make their mark before the elections on March 3, when voters will select two council members to serve four-year terms.

On stage before a crowd of approximately 40 people at the community center at Roxbury Park, the challengers – write-in candidate and attorney Aimee Zeltzer, Planning Commissioner Lori Greene Gordon, member of the city’s Technology Committee Robin Rowe and Rabbi Sidney “Simcha” Green – and the incumbents – Dr. Julian Gold and Lili Bosse – covered several topics in a format that allowed more back-and-forth debate than in previous candidate forums.

Moderator Les Bronte, president of the Beverly Hills Active Adult Club and a former mayor of Beverly Hills, quizzed the candidates with individual questions tailored to their backgrounds and campaign platforms, especially on issues that would affect seniors. After each candidate answered, their opponents were given the chance to respond with their own opinions or address comments made by the others on stage.

With the state pushing Beverly Hills to build 3,100 housing units, the issue of housing deeply divided the candidates, with the incumbents and Planning Commissioner Gordon proposing incremental change and challengers Rowe and Zeltzer offering unorthodox solutions.

Gordon suggested amending the city’s general plan to allow increased height and density – which currently stands at three stories and units no smaller than 1,000 square feet – to allow for more affordable units to be built, which would make it easier for seniors to afford to live in the city. She also expressed support for mixed-use developments.

“We can develop somewhat taller and denser buildings if we make these types of amendments that will enable you to stay here in Beverly Hills and retain the lifestyle that you’re used to, but maybe an apartment that is 600 square feet or 700 square feet [instead of] 1,000,” Gordon said.

Bosse added that some areas of the city that are zoned for buildings as tall as four stories only contain two-story-tall buildings, and building higher in those areas, as well as increased mixed-use developments, will add to the city’s housing stock.

“With that, we will be able to achieve the mandate,” Bosse said.

Gold agreed that smaller units and mixed-use projects will make it easier for young people and seniors to live in Beverly Hills.

“There are parts of town that are just begging for us to do this, and I think we have to start it sooner than later,” Gold said.

Zeltzer, however, extolled the fresh ideas that new representatives would bring to the council. As an example, she cited housing pods, which create affordable housing at a faster pace than traditional construction, and cohousing, where tenants have private living spaces but share areas like kitchens and common rooms.

Rowe restated his desire to see two 70-story towers built in Beverly Hills and said his fellow candidates were “vastly underestimating the amount of construction that we have to do.”

“We should build residential towers, so that we can build them quickly. Let’s take 10 years and have affordable housing in a timeline that makes sense,” Rowe said.

Bronte also asked Rowe about how the city should better prepare for a firestorm, or a large wildfire that creates its own weather system. Rowe claimed the city’s status quo is insufficient to keep people safe, as there is “no way” the city could evacuate all of its residents quickly.

“I don’t want to be alarmist here, but by the time you get a warning, you’re probably dead,” Rowe said.

Rowe said Beverly Hills Fire Department Chief Greg Barton told him that the city has 1,200 trees that are a risk of burning, “and that’s just the beginning.”

“We should have done this much sooner. We shouldn’t have waited until a disaster to other cities to say, ‘Well, maybe we should clean this up,’” Rowe said.

“I think [this] is something that should immediately be changed for the safety of the community because it’s all about safety, not about aesthetics, when it comes to life-saving measures like making sure a giant pine tree in front of your house doesn’t burn and cause the entire neighborhood to go down,” Gordon said.

Bosse said she wants to roll out a new program called Just in Case, as the city’s emergency plans are dated. For instance, she pointed out that the city’s plans call for the public to assemble at El Rodeo School and Beverly Hills High School, which are under construction.

“I don’t believe that our community is ready … so I’ve been working with the police department and fire department to make sure that we as a community, just in case, are the most prepared community for fires, for earthquakes, for anything,” Bosse said.

Gold said while the city is changing how it manages trees as more knowledge is gained from disasters elsewhere, he suggested the city should also put technology to use to make Beverly Hills safer by keeping residents informed.

“Despite the dire warnings from Mr. Rowe, I do think that there are technologies that we should explore that will keep our residents notified of what’s going on,” Gold said.

On the topic of interfaith relations, Bronte asked Rabbi Green about how he would get religious organizations more involved in the community, as Green has said it is one of two issues on which he is campaigning.

Rabbi Green criticized the city for scheduling major days of BOLD – Beverly Hills Open Later Days – on the Sabbath, because a large proportion of Beverly Hills residents are Jewish. Green said the BOLD scheduling is part of a larger pattern of the synagogues in Beverly Hills not knowing they can come to the City Council – all five members of which are Jewish – with requests.

“I think the council should reach out to the synagogues,” Green said.

Zeltzer, who previously served on the South Robertson Neighborhood Council, said she was surprised that the city doesn’t “have anything or barely anything for the Jewish people.” She added that Roxbury Park would be a perfect place for a multireligious event to bring the city together.

“We’re doing it over in Pico-Robertson, on the South Robertson Neighborhood Council, and we’re much smaller, we have much less funds. Why can’t it be done here?” Zeltzer asked.

Bosse called the criticism “fake news” and said that the city reaches out to representatives of all faiths for events like the mayor’s installation. Bosse added that the community of Beverly Hills isn’t separated along religious lines.

Gold echoed Bosse’s sentiments and said the city holds events that appeal to people of all religions.

“It may not be obvious, but there is an intersection between the city and the religious institutions,” Gold said. “But for us to actually create events that are religious in any context, I just think it’s the wrong thing to do.”

Rabbi Green added that he blames City Attorney Laurence Wiener, who he called “the most powerful man in the whole city,” for preventing more Jewish influence in city activities.

Rabbi Green took another of his questions – what he would like to see the City Council do for seniors – and addressed his other primary topic: medical cannabis. Green suggested seniors would benefit from allowing the sale of medical cannabis in Beverly Hills, as they could use cannabis products instead of some pain medications. The city currently only allows the delivery of medical cannabis from outside the city.

“It’s time to reconsider that …  If we’re going to be a healthy city, then let’s let people use medical marijuana,” Green said.

Bosse countered that when the city considered allowing cannabis businesses, the public pushed back and said “unequivocally” they did not want it, as did the Beverly Hills Police Department.

“There’s tremendous amount of crime in the areas that are around these establishments that sell marijuana. It was a decision that was really set by this community. They said ‘no,’” Bosse said.

When Rabbi Green argued that the opposition to marijuana businesses was led by Gold, who he claimed was more worried about smoking than cannabis, Gold, an anesthesiologist, confirmed that he opposes smoking and vaping on health grounds, and he said cannabis use can lead to other health problems as well.

“That said, there are other issues with marijuana, and not the least of which is you cannot put the money in a bank, so these [businesses] are built like forts … There’s a lot of evidence now that says they’re dangerous,” Gold said.

Gordon, the Planning Commissioner, agreed with the incumbents. Gordon said the commission considered the issue before it came to the City Council and also had concerns about crime and the prohibition on banks servicing cannabis businesses. Gordon added that allowing delivery, as well as the growing of a small number of cannabis plants for personal use, allows medical cannabis patients to get the products they need.

Allowing cannabis businesses in Beverly Hills, however, is “not appropriate for our city at this time,” she said.

Rowe suggested the city could allow the warehousing of cannabis in Beverly Hills, as that would provide tax revenue, and he added that he believes the banking issues could be solved.

Zeltzer, who said she’s a breast cancer survivor, said medical cannabis was “very helpful” for her. She added that, along with the health benefits, cannabis could boost the retail industry.

“My idea, which I think is somewhat a compromise, would be to have like an upscale edible [retail store]. I’m not at all for smoking marijuana either … It would be a very nice thing to have one of these stores in Beverly Hills, like an upscale [edible store],” Zeltzer said.