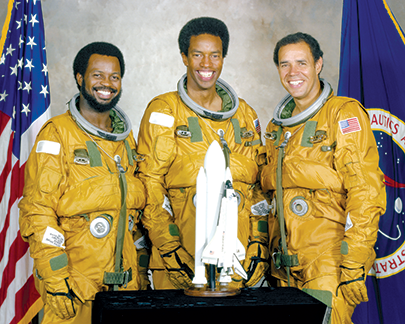 On Monday, Feb. 20, the California African American Museum, Spectrum and the Smithsonian Channel will host a screening of “Black in Space: Breaking the Color Barrier.”

The film tells the story of the world’s first black astronauts and examines the crucial moment when America’s history of racial prejudice became a critical vulnerability in the effort to win hearts and minds around the globe.

Panelists include Laurens Grant, the film’s director and producer; Edward Dwight, a U.S. Air Force pilot and NASA astronaut candidate; and Kenneth Phillips, a curator for Aerospace Science at the California Science Center. The discussion will be moderated by Entertainment Tonight co-host Kevin Frazier.

The event is private and open only by invitation. It will be held at the California African American Museum in Exposition Park. A reception will be held at 6:30 p.m., followed by the screening and panel discussion at 7:15 p.m.

“Black in Space: Breaking the Color Barrier” will premiere at 8 p.m. on Feb. 24, on the Smithsonian Channel.

The California African American Museum is located at 600 State Drive. For information, call (213)744-7432, or visit caamuseum.org.