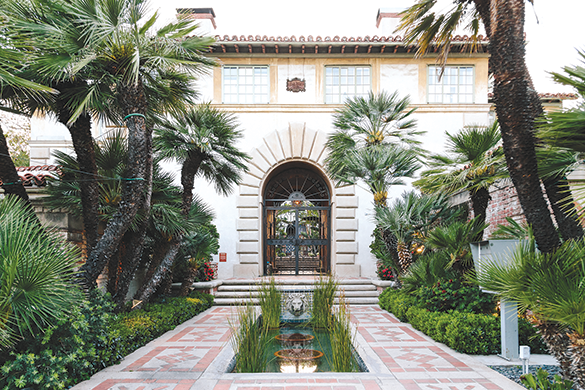 The Villa d’Este apartments on Laurel Avenue in West Hollywood are included in a series of photographs chronicling the city’s historic properties. (photo by Tony Coelho)

The city of West Hollywood will debut a new exhibition, “Historic WeHo,” featuring photographs of historic properties in the city by Tony Coelho, at the West Hollywood Library.

West Hollywood recognizes the importance of preserving cultural resources and since adopting its historic preservation ordinance in 1989, has designated more than 80 sites, including six historic districts. Through historic preservation, the city and its community members embrace the stories of people, events and ideas that helped shape the city.

In 2015, the city of West Hollywood began a project with photographer Coelho, to document the city’s designated historic properties. The “Historic WeHo” exhibition includes a selection of photographs from the project representing diverse architectural styles and associations with well-known architects and builders. The images celebrate West Hollywood and recognize its past, present and future.

“Historic WeHo” will be on display through Wednesday, May 13, at the West Hollywood Library, 625 N. San Vicente Blvd. A reception will be held on Friday, March 6, at 7 p.m. in conjunction with an event for the city’s WeHo Reads program featuring Antonio Gonzalez’s book, “Architects Who Built Southern California.” The reception will be held in the library’s community meeting room. Admission is free and open to the public, and RSVP is requested by visiting wehoreadshistoricweho.eventbrite.com.

Gonzalez will also present stories about the people behind some of Southern California’s most iconic buildings, including many who designed buildings in West Hollywood. Among the architects who settled in the West Hollywood area were Claud Beelman, known for designing the Elks Lodge in Los Angeles; Albert C. Martin, architect of Grauman’s Million Dollar Theater; and Julia Morgan, the first woman architect licensed in California and designer of the Examiner Building.

JFLA honors leaders in the fight against homelessness