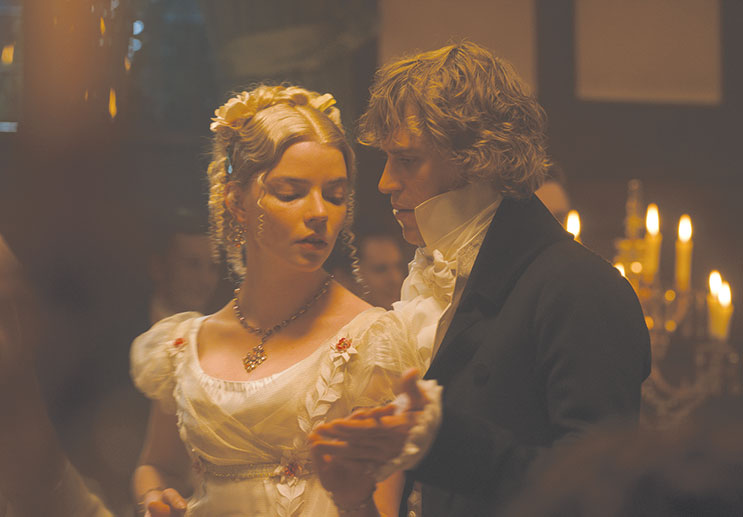 Step aside, bow-wielding Gwyneth Paltrow, a new Emma has arrived, ready to catapult us into all the early 1880s drama only the mighty Jane Austen provides.

This time around, the role of heroine belongs to Anya Taylor-Joy. She made a name for herself in horror flicks like “The Witch” and “Split,” but she does just fine as the almost 21-year-old “with very little to distress or vex her” Austen wrote about in 1815.

The fourth film adaptation of “Emma” (of course I include “Clueless” on that list) certainly hopes to establish itself as the quintessential telling. Or at least that’s how I interpret the period (or full stop to invoke the film’s U.K. setting) included at the end of the actual title of “Emma.” Certainly, this iteration brims with charm and costume design ready-made for the next awards season, but not enough for me to abide by such a tedious use of punctuation where it has no business.

Vanity is the key word here, and Emma Woodhouse (Taylor-Joy) deposits far too much of this bankrupt cultural currency. The daughter of an aging father (Bill Nighy) at the Hartford estate in Highbury, she knows her way around too many upper-class social gatherings. And once she successfully plays matchmaker for Mrs. Weston (Gemma Whelan, “Game of Thrones”) and the previously widowed Mr. Weston (Rupert Graves, “Sherlock”), Emma becomes a self-declared expert on the coupling of others. 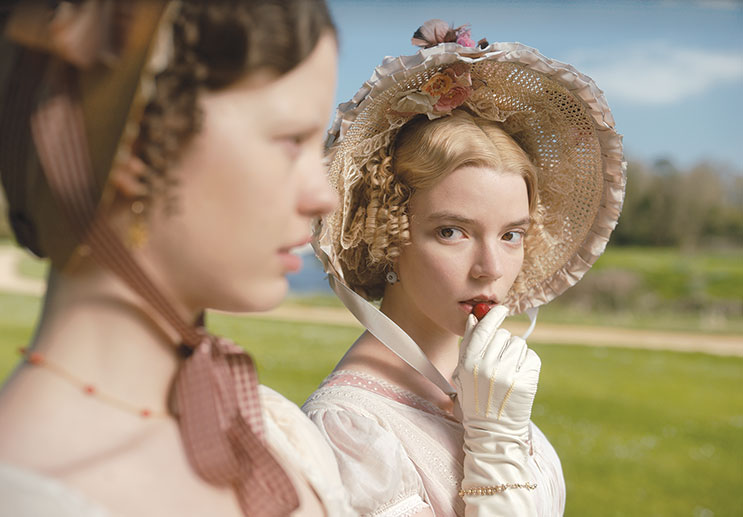 Anya Taylor-Joy stars as the title character and Mia Goth as Harriet Smith in “Emma,” the newest film based on the novel by Jane Austen. (photo courtesy of Focus Features)

As events unfold, we quickly see how little dear Emma knows about such matters. First, she convinces bestie Harriet Smith (Mia Goth) to decline a proposal from Mr. Martin (Connor Swindells), despite both their wishes. Instead, she attempts a paring that backfires sensationally, proving Emma’s ineptitude and daftness to others’ feelings.

None of this should be a surprise for the mistress of Hartford. After all, neighbor and friend George Knightley (Johnny Flynn) remains her sole critic, challenging the rather overt classism that dictates her choices and opinions of others. A particularly tragic target of ridicule is Miss Bates (Miranda Hart, “Spy,” “Call the Midwife”), whose only crime is being both too kind and a touch dull.

And then there’s the mystique surrounding Frank Churchill (Callum Turner), Mr. Weston’s son from the first marriage who dared not attend the second wedding. That’s the modern-day equivalent of disliking Beyoncé, but Emma remains intrigued nonetheless. She’s a brat, after all.

Sure, you might need a program with character bios to track everyone, but if you just embrace it as a zany period piece, then the outcome is rather satisfying. The ensemble cast is quite quirky, from Mr. Elton’s (Josh O’Connor) fragile ego to his new wife’s (Tanya Reynolds) strange approach to pretentiousness.

The real star, as it should be, is Emma. Normally, the entitled rich person is the villain, but Taylor-Joy infuses the character with enough charisma and the possibility of hope that the performance never becomes tiresome or reviling. Instead, her pride neatly compliments Mr. Knightley, her opposite.

Between this unlikely pair, a tinge of sexual chemistry breaks through all the elite’s pomp and circumstance. OK, not really a tinge. When our introduction to Mr. Knightley includes a side shot of his bare derriere, then perhaps we’re experiencing the randiest Austen movie yet, a kind of sendoff to the pre-Victorian era before repression ruins all the fun.

Director Autumn de Wilde might be new to feature films, but her photography and music video work with artists like Beck, Rilo Kiley and Florence + the Machine dates back more than a decade. She successfully transitions from short-form to full-length audio-visual content, and whatever comes next will certainly build on this splendid gem.

“Emma” is an easygoing experience. It lacks the commercialism of 2019’s “Little Women” with a brisk pace and larger narrative tension. This one’s all about subtlety, a fitting approach to Austen’s material, but don’t worry, that randy subtext is a lotta fun.

NPR takes its program onto the stage