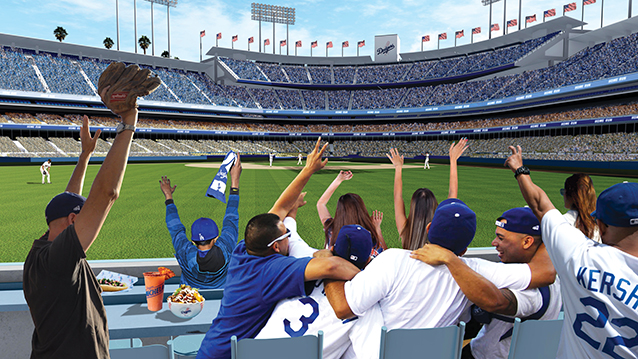 Updated renderings of Dodger Stadium show plans for two rows of “home-run seats” to be added to the front of the outfield pavilions. (rendering courtesy of the Los Angeles Dodgers)

On Feb. 13, the Los Angeles Dodgers revealed an updated video simulation and renderings of the Dodger Stadium improvements as the club continues to enhance the fan experience at Major League Baseball’s third-oldest ballpark with modern and fan-friendly amenities.

The project will create a new “front door” to Dodger Stadium, with two acres of food and entertainment offerings in the new Centerfield Plaza and renovated pavilions, and also improve ballpark circulation through the addition of elevators, escalators and bridges – all without changing the look and feel of one of the most picturesque stadiums in sports. Further details on the project will be announced as Opening Day approaches, including food and beverage concepts and interactive experiences.

The updated renderings also include a Centerfield Bar that will replace the tarp that stood above centerfield. The new structure will offer a viewing deck with a game perspective previously only enjoyed by way of television cameras. The centerfield improvements will house many new spaces that enhance the fan experience, including shaded areas where fans can watch the game while enjoying food and beverages, large screens for game viewing, interactive entertainment and several kids areas.

The Legends of Dodger Baseball will have a permanent home inside the Centerfield Plaza. These legends’ plaques will join other displays honoring the Dodgers’ rich history, including the relocated Jackie Robinson statue and a Sandy Koufax statue, which will be unveiled during the season.

In addition, two rows of “home-run seats” have been added to the front of both outfield pavilions. These seats will be barstool style with drink rails and will include in-seat food and beverage service. Underneath the outfield pavilions, the Dodgers have created bars that will be accessible to all fans. Each will be uniquely themed and have an eye-level view into the adjacent bullpens.

Fans will now be able to enter through any stadium gate (regardless of seat location) and have easy access to the entire stadium. Additionally, new bridges will link the pavilions to the main seating bowl with easy access to all levels.

While the goal remains to complete all renovations by Opening Day, March 26, some elements will be unveiled and added during the first few homestands. The renovated pavilions and Centerfield Plaza will not be accessible during the Freeway Series, March 23-24, so finishing touches can be completed.