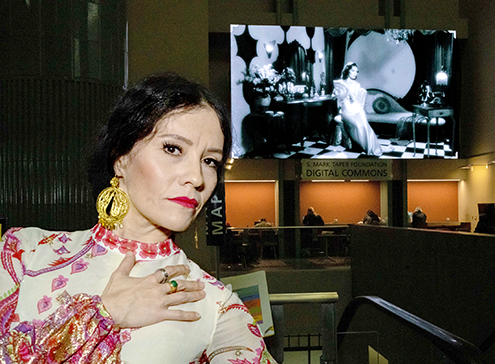 The Los Angeles Public Library is adding new digital art to the Central Library’s Atrium Video Wall in the form of a series of short films that depict notable historic Angelenos.

Designed as living portraits, the films depict six representatives from L.A.’s past to recognize and showcase the diverse nature of the people who built the city, including Dolores del Río, Jefferson Edmonds, Tessa Kelso, Biddy Mason, Toyo Miyatake and Pio Pico.

“We hope that these living portraits will spark interest in the amazing individuals to whom they pay tribute,” City Librarian John Szabo said. “We honor a cross-section of women and men from diverse communities who together helped create the city of Los Angeles.”

Following an open casting call, the library patrons and community members chosen to depict these historic figures were selected for either their resemblance to the people portrayed, interest or family connection to them.

The cast selected to star as historic Angelenos are Victoria Bernal as Kelso, Paul Edmonds as Jefferson Edmonds (his great-grandfather), Darrell Kunitomi as Miyatake, Esteban Martinez as Pico, Lorinda Hawkins Smith as Mason and Beatriz Vasquez as del Río.

Del Río was a Mexican actress who was the first major female Latin American crossover star in Hollywood. Jefferson Edmonds was a prominent African-American newspaper editor and political activist in late 19th-century Los Angeles. Kelso was the sixth city librarian of Los Angeles, overseeing the dramatic expansion of the library’s collections and advocating for open collections and abolished member fees. Mason, a former enslaved woman who won her freedom in court, was a real estate entrepreneur, philanthropist and founder of the First African Methodist Episcopal Church. Miyatake was a photographer best known for his images of the Japanese-American community and the internment at Manzanar of Japanese-American people during World War II. Pico was a rancher and the last governor of California under Mexican rule.