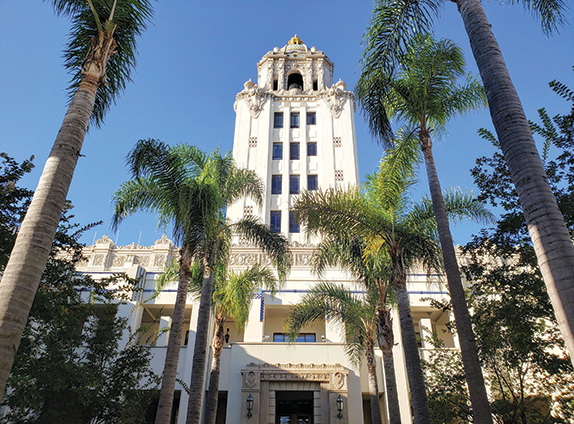 Beverly Hills’ pensions are dependent upon the investment returns of CalPERS. (photo by Cameron Kiszla)

Beverly Hills might take a more aggressive tack on its unfunded pension liability.

In a study session on Feb. 18, the City Council discussed ways the city could pay down its unfunded liability with the California Public Employees’ Retirement System, otherwise known as CalPERS, which is more than $280 million.

The council members all agreed that they were open to the city pursuing a quicker timeframe for reducing its unfunded liability, which would save the city millions on interest payments.

If the city were to continue making pension payments at its current rate – including the $23 million already in an irrevocable trust for pension payments and the $5 million budgeted each year to be added to the trust – the city would have funded its pension liability by 2043.

City staff suggested the council consider paying off the pensions in 20 or 15 years, which would save the city $18 million or $97 million, respectively, especially if more money were sent to CalPERS directly, which would apply more money to the principal instead of paying down interest.

The council agreed on the 15-year time frame, which Councilman Robert Wunderlich called “prudent” and “appropriate.”

Some of the council members pushed for a shorter time frame. Councilwoman Lili Bosse noted that while the 15-year plan is “better than what we have now,” she would like to see the numbers for five- and 10-year plans as well.

“I would like for us to look at perhaps being a bit more aggressive,” Bosse said.

Vice Mayor Lester Friedman said he wanted to see how the city would benefit from a 10- to 12-year plan “to see what the additional savings would be.”

Mayor John Mirisch also suggested Beverly Hills underestimate the amount of money CalPERS will earn on its investments each year. Currently, CalPERS puts that figure at 7%, though Palo Alto has decided to use the 6.2% estimate provided by Santa Monica-based Wilshire Associates instead.

If the city were to underestimate the investment return, the conservative strategy would help protect Beverly Hills in an economic downturn and, even if there is no market slowdown, Beverly Hills would pay back its investment more quickly, Mirisch said.

“By budgeting to that level, we effectively preclude the whole thing from getting deeper year by year,” Mirisch said.

The tradeoff would be that Beverly Hills would have to set aside more money for its unfunded pension liability each year, which might result in fewer or lesser services. Wunderlich suggested that tactic might be too extreme, saying that a year-by-year consideration of putting more money toward the unfunded pension liability would allow Beverly Hills to remain flexible with each year’s budget.

“We don’t want to make a commitment that we might regret making in the future,” Wunderlich said.

The council members asked Muir to return with several proposals, including a request from Council­man Julian Gold that the city consider using a bond to pay off the unfunded pension liability, which would essentially have the city wager that the bond interest rate – Muir estimated it could be approximately 4% – remain beneath CalPERS’ interest rate.

Muir was also asked to come back with estimates for the expedited schedules proposed by Bosse and Friedman.

“This council does take the unfunded liability seriously … but we could always do better,” Friedman said.