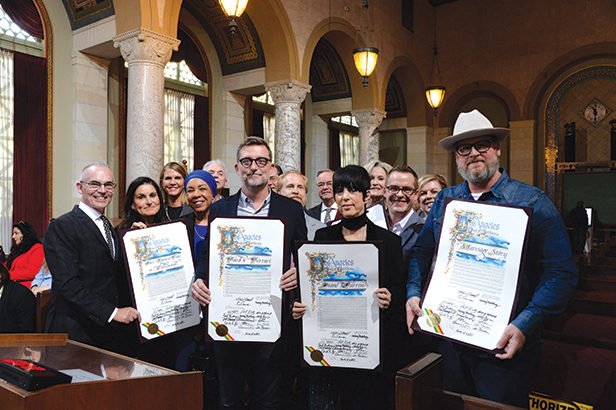 As part of the Made in Hollywood Honors, O’Farrell presented official city certificates to representatives of five Oscar-nominated films. The MIHH program salutes films nominated for Academy Awards for Best Picture or Best Animated Feature that are produced and filmed in California.

Additionally, O’Farrell honored veteran songwriter Diane Warren with a Lifetime Achievement Award. For over the past 35 years, Diane Warren has written memorable songs for films, all while based in Los Angeles. Her work has resulted in 15 Grammy Award nominations and one win; five Golden Globe Award nominations and one win; a Primetime Emmy Award; a star on the Hollywood Walk of Fame in the 13th District; and 11 Academy Award nominations for Best Original Song. This year, she is nominated for her song “I’m Standing with You” from the film “Breakthrough.”

The event was a collaboration of O’Farrell, SAG-AFTRA, the California Film Commission, FilmLA, Teamsters Local 399, the Film Musicians Secondary Markets Fund and the Producers Guild of America, together with MIHH partner and co-sponsor, 1600 Vine, and its managing partner, Klein Financial Corporation.

MIHH was established in 2011, and since then, five of the honorees have gone on to win Oscars for Best Picture or Best Animated Feature: “The Artist,” “Argo,” “Frozen,” “Big Hero 6” and “Inside Out.” In addition, each summer, the Made in Hollywood Honors recognizes Emmy-nominated television productions made in California.

Social media to be honored