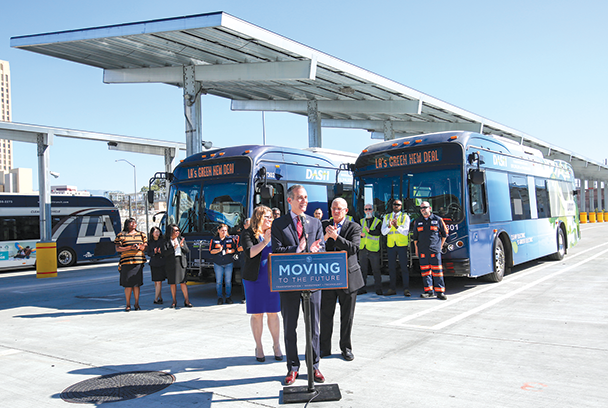 “The clean transportation revolution is not a distant dream, it’s happening on L.A.’s streets right now,” Garcetti said. “Seeing these zero-emission buses rolling down our roads in the years ahead will bring us one step closer to realizing our vision of cleaner air, lower emissions, healthier communities and a more sustainable future for all Angelenos.”

BYD, a bus manufacturing company based in China with a facility near downtown Los Angeles, will manufacture 130 of the buses, while 25 more will be purchased from local manufacturer Proterra. Delivery and deployment of the buses will begin in March and run through 2021.

“Los Angeles is making a bold investment in a clean transportation future,” added LADOT General Manager Seleta Reynolds. “These 155 buses will save the city money on fuel costs and improve air quality and health for families across the region we serve.”

Garcetti made the announcement at LADOT’s new bus maintenance yard, a three-acre, LEED Platinum-certified facility where up to 70 buses can be serviced. It is one of the largest EV bus facilities in the state.