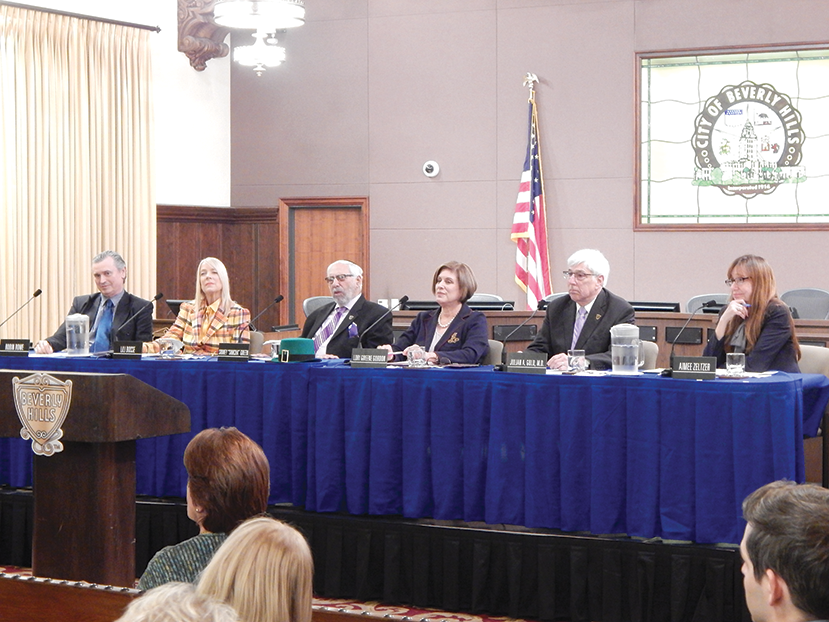 In a contentious candidate forum hosted by the Southwest Beverly Hills Homeowners Association in the Council Chambers at City Hall on Feb. 11, the six hopefuls for City Council overcame several disruptions, including a disorderly protester and a loud disagreement over the rules for questions from the audience, to debate a variety of topics of concern for Beverly Hills voters.

One member of the audience attempted to ask a question about what she described as “outrageous” salaries for city employees, though moderator Ken Goldman, president of the HOA, said the audience member had exceeded the 15-second time limit and the question included too much personal opinion. Most of the candidates declined to respond to that question, but they weighed in on other topics, including parking and traffic near the Wilshire/Rodeo subway station, the city’s unfunded pension liability and ways Beverly Hills can make it easier for young people and the elderly to afford to live in the city.

When Goldman asked the candidates about the subway station and its potential to divert traffic into the Golden Triangle – the business district bounded by Rexford Drive, Santa Monica Boulevard and Wilshire Boulevard – and onto residential streets, Planning Commissioner Lori Greene Gordon said the subway opening will not remove as many cars from the road as some people hope. Instead, the city should set up drop-off and pick-up points for ride-hailing services and encourage people to walk or ride a bicycle.

“I think we have to be very, very serious about multimodal transportation around the subway stops,” Gordon said.

Incumbent Councilman Julian Gold proposed that technology, such as the use of autonomous vehicles, might help alleviate some traffic in the area. Gold added that since the city owns the land, there might be room for some parking spaces, as well as the police substation and other amenities some would like to see at the station.

Write-in candidate and attorney Aimee Zeltzer said Beverly Hills doesn’t “have to reinvent the wheel,” but can instead look at what other cities are doing, such as Long Beach’s electric bus that helps people traverse the city. A network of bicycle lanes would also help, she added.

Robin Rowe, who serves on the city’s Technology Committee, advocated for his skyway – elevated cable-car gondolas – which he said would provide a long-term fix. Rowe said autonomous vehicles, rail and other forms of ground transportation won’t be permanent solutions for the city.

“Our traffic congestion is going to increase, and in five years will feel exactly the same as before we did all that,” Rowe said.

Incumbent Councilwoman Lili Bosse, whose answer was interrupted by a protester who was eventually removed from the chambers, said the City Council was aware that the lack of parking was a flaw with the subway plan, so the city purchased a property to be used for drop-offs, pick-ups and, potentially, policing. She added that more properties might be necessary to accommodate parking.

“I think we also have to be creative in other modes of transportation, whether it’s autonomous vehicles or walking,” Bosse said.

Rabbi Sidney “Simcha” Green, who has repeatedly stated that his focus is on two issues – interfaith relations and medical cannabis –jokingly suggested that subway riders could use “rickshaws or something,” one of several of his responses that drew laughs from the audience.

“I’m very confident that our police department will be able to meet with us and to come up with solutions to this problem,” Green added.

The candidates were also asked about the city’s unfunded pensions, which Goldman said total $295 million.

In comparison, the city’s annual budgeted expenditures are $439 million, Goldman added, and the capital improvement budget is $68.5 million.

Bosse said each year, the council puts money aside to pay down the unfunded pension liability.

When pressed by Goldman as to whether the unfunded pension liability has come down in recent years, Bosse asserted that it is being reduced.

“We are the envy of probably most cities in terms of how we manage our budget and how we make fiscally responsible decisions,” Bosse added.

Green did not offer his own ideas on the unfunded pension liability. Instead, he gave advice to the voters.

“If you feel that the number is too high, then you have to vote for the candidates who are not incumbents now,” Green said.

Gordon said last year, the city had a budget surplus of approximately $24 million, only $3 million of which went to the unfunded pension liability.

Green added that while budgets and pensions may not be “attractive” or “fun,” they are important.

“The city council currently is not that serious about unfunded liabilities … This is something that I think is a priority to address,” Gordon said.

Gold cited limitations placed on Beverly Hills and other cities by the California Public Employees’ Retirement System, or CalPERS, which he said won’t let the city set up a plan like a 401(k), but the city has created a trust to help pay off the unfunded liability at a quicker pace.

“I think that all things considered, we’re heading in the right direction,” Gold said.

Zeltzer suggested taxing cannabis to raise money to put toward the unfunded liability. The city doesn’t allow cannabis businesses to operate in the city except for medical cannabis deliveries to residents.

Zeltzer added that she would look into the issue in more detail, though financial planners could help “get the city back on track.”

“If it’s a problem, then I would get new people on the council,” she said.

Rowe countered that cannabis is already overtaxed and has created a black market in the state, though he is open to making Beverly Hills more accessible to cannabis businesses.

“Delivery services for cannabis here actually come from somewhere else, and we’re forgoing the tax and the income from that,” Rowe said.

A member of the audience asked the candidates how they would produce the more than 3,000 housing units the state would like to see built in Beverly Hills and what the city could do to make it easier for young people and the elderly to afford to live in Beverly Hills.

“Part of that was to make sure that families are not priced out, that the younger generation would be able to stay in this community or move into this community,” she said.

Gold suggested that smaller units with fewer parking requirements could be built near the future subway stations or city parks for younger people and those who wish to downsize from single-family homes.

“I think it’s critically important for us in the next little bit to really begin to effectuate this. It’s not enough to talk about it. We have to get this done,” he said.

Gordon said that while she’s pro-density and open to increasing height limits, she would protect single-family zoning. She added that there’s enough room in the city’s multi-family zones to allow for growth and La Cienega is a good place to start.

“We have so much space in the … multifamily zones that will enable us to go higher,” Gordon said.

Green said it’s a “shanda” that so many people who are service workers in Beverly Hills do not live in the city.

“I think I would put that as the No. 1 priority, to find ways to have these people live in our city,” Green said.

As he did in a forum earlier this month, Rowe advocated for building two 70-story towers of housing units to help the city meet demand.

“When people talk about adding a story here or there, or we’ll do some mixed-use or this or that, they’re talking about 30 to 300 units. They’re not talking about 3,000,” Rowe said.

“This is something that younger people would like, and it would also be very helpful for elderly people to live in environments where you have community garden and you’re close to each other,” Zeltzer said. “The spaces are smaller, but it’s giving the community what they want in terms of a walkable city and having everything at your convenience.”